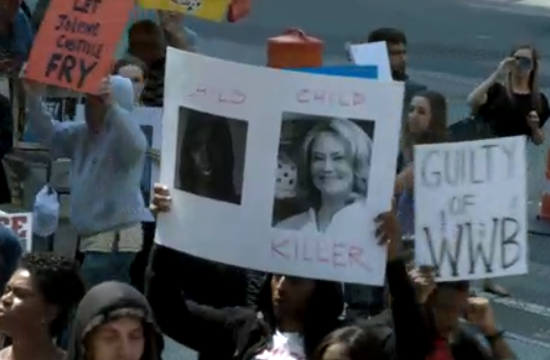 In the food world, Paula Deen’s statements on racism are considered silly, uninformed, and especially mockable. In New York City, the dedicated writers who report on ridiculous attempts to turn racism’s hottest stories into a homicide-filled Law & Order: SVU episode are known as The Braiser. These are their recaps.

We open to a succession of MILFs from the Upper West Side, tearfully telling Mariska Hartigay’s character about how they got raped by a six-foot-tall black man who wears condoms. The SVU team is on it…after they get a restful night’s sleep, because they were too busy before dealing with the other rapes. Because rape never sleeps. (Ugh, that’s a depressingly true statement.)

Especially when all of the black men on the Upper West Side are conveniently hanging out in front of Central Park, wearing traditional gangster attire. (It’s so much harder to find black men when they’re wearing Brooks Brothers and Ferragamo loafers. It’s like they turn into white people.)

But this citywide stop-and-frisk is not important, because we need to get to the MORE DRAMATIC STORY: here is Jolene Castille (played by Cybill Shepherd), a Southern celebrity chef who also happens to have a French last name. She is glitzy and spangly and middle-aged, which makes the scary-looking black man in a hoodie and baseball cap behind her stand out.

Are these costume choices visual symbolism for Jolene’s fame and glamour, versus Fake Trayvon Martin’s Otherness inherent in the fact that we never see his face? We don’t have much time to think about it, because a gunshot rings out, the police suddenly stop stopping and frisking, and run over to Jolene, standing over the Scary-Looking Black Man with a gun.

At the hospital, we learn that Scary Looking Black Man is actually a sixteen-year-old kid named Mekhi — or Mikael? Mikhail? Mickelle? Ma Belle? I have no idea how to spell his name, nor do the actors know how to pronounce it. His parents insist that he’s not a rapist — just a young honors student with earbuds and a love of basketball, and a convenient habit of walking around the Upper West Side every night that each rape happened. None of the other victims are convinced it’s Mekyle, though.

In her interrogation, Jolene has hired the man I only know as George Oscar Bluth to be her celebrity lawyer. She’s very insistent that Merman was trying to rape her, though she’s surprised that Mickey was only sixteen. (“He seemed so big!”) Bluth points out that Merkel was unable to hear Jolene’s demands to stop following her, since the teenager was wearing earbuds under his hoodie. (Mark it off if you’re playing “Trayvon Martin Analogue Bingo”.) Jolene is adamant that he was trying to follow her home, adding that he’d followed her through the gate. “I’m sorry for his parents, but I’d do it again if I had to,” she says with the straightest face.

Back at the hospital, a priest is comforting the parents of the teenage boy now known as Merkod, while Ice-T admits that they have no DNA evidence linking the two. Merkod dies. RIP, Morgoth.

And the SVU team know that they’re fucked, because it turns out someone caught the rapist while he was attempting to rape. We know it’s the real rapist, because he has a gun, and also threatens to rape Mariska Hartigay the very moment they arrest him. She’s not having it, and literally kicks him into the police cruiser. Eventually, the show writers realize that they should probably make it clear to the audience that this is the Real Rapist, so the SVU team does some detective work and gets it confirmed.

This story is moving along very quickly.

According to the sassy autopsy doctor, there was no physical evidence that Miguel was two feet away from Jolene when she shot him. Team SVU decides to go to Jolene’s restaurant to question her — except the sassy autopsy doc warns Ice-T that he might not be welcome in the men’s room: “My ex-husband’s nephew worked there. When the kitchen bathroom broke, she wouldn’t allow ‘the help’ to use the customer’s restroom. They had to use the diner across the street.” Well now, Jolene is a subtle racist!

DONK DONK and now Ice-T and Mariska Hartigay are at Chez Jolene, which is a name that no one ever calls their restaurants anymore. Jolene cannot believe that the other rapist was the real one, and insists that she was being threatened by MacGuffin. Ice-T is not having it. “How close was he?” He moves in and grabs her arm. “Close enough to touch you?”

“GET YOUR HANDS OFF ME,” Jolene screams at a black man. Now Jolene is an unsubtle racist.

Jolene also adds that he said something to her that the real rapist had said to his victim: “‘I know you want it.'” Mariska goes WHOA HOW DID YOU KNOW THAT and WHY DIDN’T YOU TELL ME THAT. Jolene shrugs and points out that it’s not like there can only be one black rapist in the Upper West Side. Um, Jolene, not to lump everyone in a group, but considering it’s the Upper West Side, there really can only be one black rapist there at a time.

We cut to a courthouse, the site of the most boring, lackadaisical race riot ever. Take this moment to yawn while a bunch of extras mope around chanting “No Justice, No Peace” over and over. Put your baby in front of it, especially if she’s been extra colicky and fussy. It’s like the extras woke up, thought “We Shall Overcome…Our Hangovers,” and then gave up. Inside, the Law and the Order teams decide to arrest Jolene for hate crimes.

Jolene knows why she’s being arrested, though: “New York is filled with blacks, Jews, and liberals. The DA wants their votes!” George Bluth is so woefully under-utilized that it pains me to listen to him boilerplate his way through this episode.

Some blonde actress takes Jolene’s prints, and the chef (man, I keep forgetting she’s a chef) asks her if she’s from Georgia. “You know if we were both back home,” she says with the ease of someone commenting about the weather, “they would be giving me a medal.” WHOA OKAY WHEN DID PAULA DEEN BECOME A CALLOUS PEOPLE-SHOOTER. This ripped from the headlines parallel world is getting too weird for me.

Commercial break. No I will not watch The Michael J. Fox Show.

It’s Jolene’s court date, and she has to fight her way through a media scrum asking thoughtful things like “Are you a racist?” This time, the extras are energized enough to push the photos of Mackey in her face.

The autopsy doctor testifies that Jolene shot Mecca from at least five feet away. The pastor testifies that Merkahd was literally a choir boy. Bluth stands up and asks the pastor if he’d ever been surprised by the actions of any of his congregants.

“No further questions.” And there’s George Bluth — a jackass who does as little as possible. (This is the perfect role for Jeffrey Tambor.)

Mariska Hartigay takes the stand, stating that Real Rapist was definitely not this sixteen-year-old, bubblegum-chewing kid. Bluth points out that the SVU team had investigated MacGuffin as a potential suspect, too: if they thought he was the rapist, Bluth asks rhetorically, how could poor Jolene do so in the blink of an eye? The parents are furious, and demand that Team SVU prove that Jolene’s an endemic racist.

So they dig, and discover that five black guys had filed a discrimination lawsuit against her in the past. And — paydirt! — they learn that she called them “field hands who’ll rob [her] blind” in a deposition. (One, check off “discrimination lawsuit” in your bingo card; two, I’m surprised some intrepid blogger didn’t uncover that way before her trial.) A judge rules that the deposition, which was supposedly sealed, wouldn’t be allowed in the trial, but they can ask her if she’s a racist. The DA looks like a real smarm-hat.

DONK DONK we’re in the courtroom, and Jolene insists that even though she’s a chef, she loves everyone. She even has a gay Chinese personal assistant! (Objection: even asshat racists can have gay Chinese personal assistants.) The smarm-hat DA asks her why she started carrying a concealed weapon in New York: “Is it because it’s less segregated than in New Orleans?” He also pulls a money quote from an interview she did with a New Orleans magazine: “No one takes the subway unless they have to in New York. It’s like a jungle train through the Congo.”

It gets heated. Jolene insists once again that she was in fear for her life, but that she wouldn’t have been afraid if Mekhail was a white boy on her sidewalk. Were you aware that Jolene had deep-seated prejudices against black people? Was it that hard to make that clear? She’ll do it again!

After the commercial break (no, I will not watch Sean Saves the World), George Bluth wants Ice-T on the stand. WHAAAAAA. George Bluth pulls out the fact that Ice-T personally stop-and-frisked twelve young, black men on the night of Fake Trayvon’s murder. And it comes full circle.

“Would you say that the NYPD routinely targets young, black males when it comes to stop-and-frisk operations?” Bluth asks-bellows. Ice-T tries to worm his way out of that one. “So how is my client racist for doing the exact same thing?” Bluth yells again.

Closing arguments. Smarmy DA is totally outclassed by George Bluth, who’s past caring about his acting at this point. There’s always money in the banana stand of SVU for out-of-work actors.

Jolene runs into a flashback-overcome Mariska Hartigay in the bathroom. “Well, this is awkward,” Jolene says, and it’s the first time I agree with her in the episode. She also does something that Paula Deen would never do: admit that she killed someone’s son, and express legitimate remorse. (We’ve never seen Paula do that, like, ever.)

But that doesn’t matter, because she’s declared not guilty! On the courthouse steps, Mekhi’s parents beg the city not to riot, which the city probably won’t do, anyways. They’ll probably mumble their way through “Go Tell It On The Mountain” and shuffle off to nap somewhere after that. The DA feels bad for not winning. Mariska Hartigay looks tortured. Ice-T shrugs and is sad about the intractable state of race relations in America: “Well, that’s the way it is.”

But most importantly, we learn that the victim’s name was spelled M-E-R-C-A-D. About time, episode.