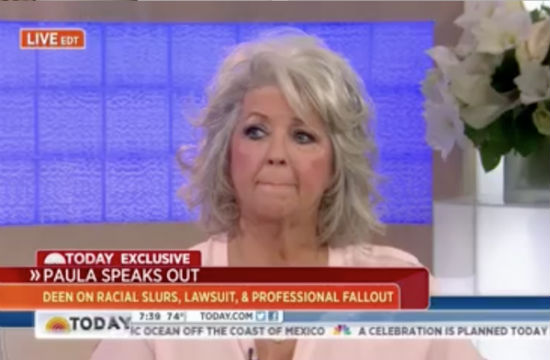 Paula Deen showed up this time for her hotly anticipated Today Show exclusive interview this morning to address the now infamous deposition she gave in which she admitted to having used racial slurs, and wanting to throw a plantation-themed wedding, with a black waitstaff dressed as slaves.

“I was overwhelmed. I was in a state of shock,” Paula told Matt Lauer of the backlash in her interview, “because there’s been some very, very hurtful lies spread about me…I’m so distressed that people I’ve never heard of are all of a sudden experts on who I am.”

“The day I used that word was a world ago,” she claims of using the N-word once in 1986 to reference to a man holding her at gunpoint. “It’s just not a part of who I am.”

And then, of course, came the blame-it-on-the-youngsters defense:

Our personal favorite admission: “There’s a couple of kinds of people that I don’t like, that I am prejudiced against, Matt, and that’s thieves and liars.”

Then, in a final burst of tears, Paula erratically professes:

Please check out parts one and two of her interview below.

Catch up on the whole saga from the very beginning: