Pay Attention, Taco Bell: 7 Foods That Are Not Tacos 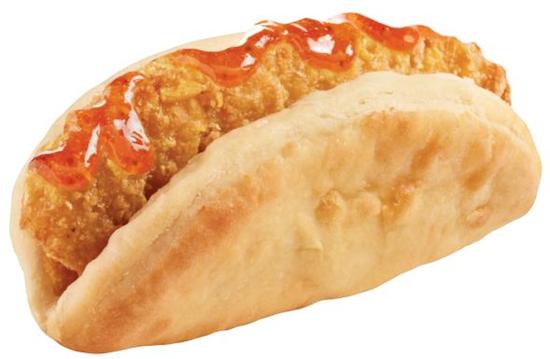 Poor, poor Taco Bell. Somewhere along the way, the chain has gotten confused as to what a taco actually is. First it was the waffle taco, now it’s the still-being-tested biscuit taco. Silly Taco Bell, biscuits aren’t tacos.

Slate notes that Taco Bell is banking on the success of their non-taco tacos, because everyone really flipped their sh*t over the waffle taco. But of course, these are not tacos. Let’s have a Taco 101 with our dear friends, shall we?

What is a Taco?

The definition, from Merriam-Webster (and for the love of God, don’t look at the Urban Dictionary definition of a taco):

a Mexican food that consists of a folded and usually fried piece of thin bread (called a tortilla) that is filled with meat, cheese, lettuce, etc.

Now, Taco Bell, we can see why you might be confused. There’s a lot of controversy as to what an “authentic” taco actually is — especially because tacos aren’t actually included in the heritage of Mexican food, according to experts. The taco is actually birthed of “Cal-Mex” roots. More on the history of the American taco as we know it:

The word taco meant a “wad” or “plug” purportedly “taken from the cotton used in ramming old-fashioned firearms.” Colloquially, taco referred to a light meal or snack. or antojitos little whimsies or small dishes. In Mexico, the word taco was a generic term like the English word sandwich. Mexican tacos are basically any food rolled, folded or fried into tortillas that are consumed by hand. The various fillings for tacos include chili sauce, beef (shredded or ground), chicken, pork, chorizo or sausage, egg, tomato, cheese, lettuce, guacamole, onions, and refried beans. Mexican tacos are usually soft-shelled, unlike the U-shaped crisp fried tortillas served in many American Mexican restaurants and fast food outlets. The first-known English-language taco recipes appeared in California cookbooks beginning in 1914. The author, Bertha Haffner-Ginger, reported that tacos were “made by putting chopped cooked beef and chili sauce in a tortilla made of meal and flour; folded, edges sealed together with egg; fried in deep fat, chile sauce served over it.” Another Californian, Pauline Wiley-Kleemann, featured six taco and tacquito recipes in her Ramona’s Spanish-Mexican Cookery. These included recipes for Gorditos that came from Santa Nita or Xochimilco, Pork Tacos composed of snout, ears, jowls, kidneys, and liver, Cream Cheese Tacos, Egg Tacos, Mexican Tacos, and Tacquitos.

We get it, Taco Bell. You want to put weird things that aren’t traditionally found in tacos into a taco. But the real problem you see, Taco Bell, is that the staple of a taco is the tortilla. Whether fried into a hard shell or served soft, tortilla is what makes or breaks a taco. So, we regret to inform you, you cannot make a taco out of these similar dough products: