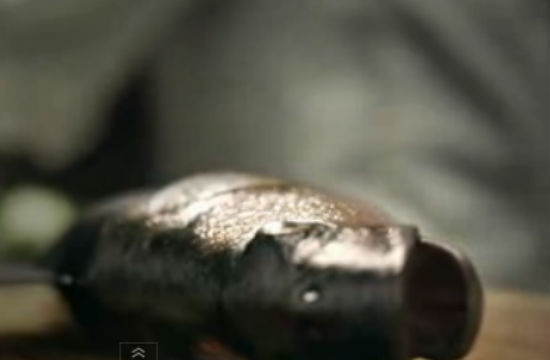 The animal rights group recently launched its Silent Scream campaign targeting Fox, Gordon Ramsay, and Hell’s Kitchen. Apparently, they’d like Fox to air their latest PSA featuring “groundbreaking new fish empathy” propaganda during Hell’s Kitchen commercial breaks, in an effort to parallel the silent screams of all those dying fishies to the distinctly audible screams of Gordon Ramsay. Wait, what?

“It may be easier to identify with our favorite Hell’s Kitchen contestants than with the fish they fillet and sauté, but fish feel pain and fear, and they suffer enormously when they are impaled, crushed, suffocated, or cut open and gutted, all while they’re fully conscious,” says PETA Senior Vice President Lisa Lange. “PETA’s ‘Silent Scream’ video tells viewers that it’s never right to hurt others simply because they are weaker than we are and can’t speak up for themselves — regardless of what species they happen to be.”

So fish = Gordon Ramsay’s cheftestants. We’d point out the leaps in logic at play here, but PETA will just fire back with statements like, “Contestants on Hell’s Kitchen choose to subject themselves to bullying in the kitchen, but the animals who are cut up and cooked on the show don’t have any choice -— and they lose their lives, not just their pride.” So we won’t even bother.

Check out the PSA below. And don’t feel bad if you begin inappropriately laughing during the sad parts at the beginning. We did, too. And it won’t even compare to the guffaws to follow once we change focus to the silently screaming fish. Because, basically all we can imagine is a Pixar cartoon salmon, possibly voiced by Ellen DeGeneres (or Eddie Murphy?), begging Chef Eric Ripert not to grill her.

PETA has to go, now. It’s late for its Fish Are Friends, Not Food meeting with those sharks from Finding Nemo.