Presidential Wine Sale To Make Up For Austerity Cuts In France 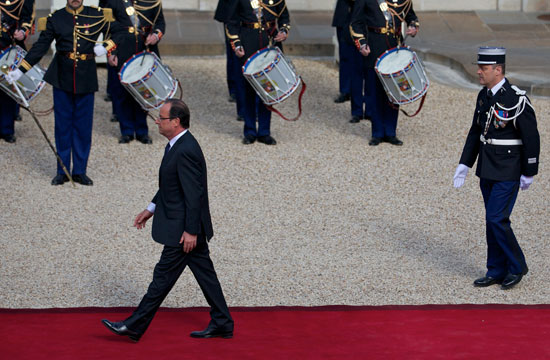 Forgetting the fact that its food is pretty much the pinnacle of the culinary world, how much does it suck to live in France right now? Fiscally speaking, it’s bad enough that the president, Francois Hollande, has turned to auctioning off the contents of the presidential wine cellar — whose racks boast some of the best wine in the world.

It’s no secret that things are not going so hot for the French economy at the moment, particularly for the government supposedly spearheading its recovery: 10% unemployment, 1.1% growth in GDP, and a few minor corruption scandals in the Cabinet involving offshore bank accounts. Things are worse for its president, Francois Hollande, whose approval ratings recently hit a low of 27% — which, to put in an American perspective, was just three points higher than George W. Bush’s lowest ratings.

Reuters recently revealed how a 1982 Bourdeaux will turn this merde around. The French government has decided to sell some 1,200 Presidential bottles, collected over the years to slake French diplomats, to fund the government in the face of austerity cuts. According to the prestigious Drouot auction house, which is running the sale, all of the bottles are at the “pinnacle of their shelf life” and should be drunk as soon as possible.

Although many of the vintages have historical significance to the Fifth Republic (perhaps even smashing windows in the student revolts of May 1968!), the auction is only expected to bring in 250,000 euros, or $327,500. How is that going to help a country whose public debt exceeds 93% of its GDP?

The answer is simple: use that money to buy cheaper wine! That is seriously what the French Government is planning to do with some of the proceeds from the auction. Stop acting like Italy, France.