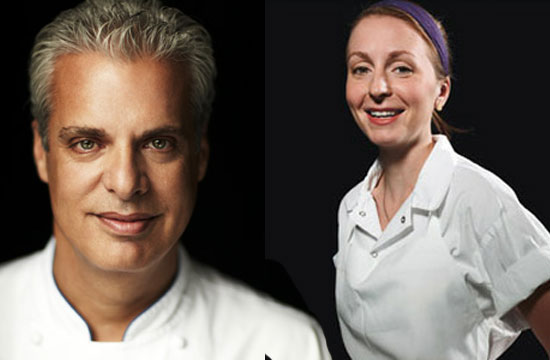 Where does flavor come from? It’s a nebulous concept, and undefinable, really, but still such an important part of eating that chefs must know this sense innately. But is it cultural? Is it rooted in emotion and memory? How do you marry the two, retain the familiar, but keep pushing the boundaries of what diners find flavorful?

Last night at the Florence Gould Hall, Eric Ripert of Le Bernardin and Christina Tosi of the Momofuku Milk Bar attempted to answer that question, describing what flavor is to them and their deeply knowledgeable palates. Hosted by the French Institute Alliance Francaise, the panel was moderated by Bon Appetit‘s executive editor Christine Muhlke and attended by people who like hearing people talk about food. We’ll hopefully have a podcast up of the entire event by the end of the week (where you can hear the audience practically moaning in delight as the two chefs describe their food memories), but for now, here’s a selection of quotes from the event.

As a kid, Ripert didn’t really have a passion for cooking, per se: “I had a passion for being in the kitchen and eating as much as I could.”

Tosi had her first tomato at the age of 18: “It gave me an opportunity to explore new flavors beyond my junk food roots.”

Ripert wanted to be a pastry chef, but was “too ADD” and ate 35 petit fours once while working at La Tour d’Argent: “I didn’t think they were counting!”

Tosi on culinary school: “[They] teach you how to make the perfect buttery, flaky tart, but you have to figure out the ‘creative process’ on your own.

Ripert: “Umami is a state of mind…I am obsessed with umami. I want to know what it is, but in Japanese, umami means ‘yummy,’ so…to me, it is that ‘Wow!’ effect that you cannot really explain.”

Ripert: Much like the intangibility of color and music, “flavor doesn’t exist. The flavors are in my mind.”

Tosi on flavors like miso, tahini, and milk powder in desserts: “Umami flavors are MSG for desserts.”

Ripert on the depth of cultural influence: “The more I research Japanese cuisine, the more I realize I know very little about it.”

Tosi on emotion vs. cultural influence: “You can’t have one without the other. Emotional connection can’t happen without cultural technique.”

Ripert used to focus on the fish, but now wants his plates to be flavorfully harmonious: “It’s [now] about a complete dish that you don’t have to talk about while eating.”