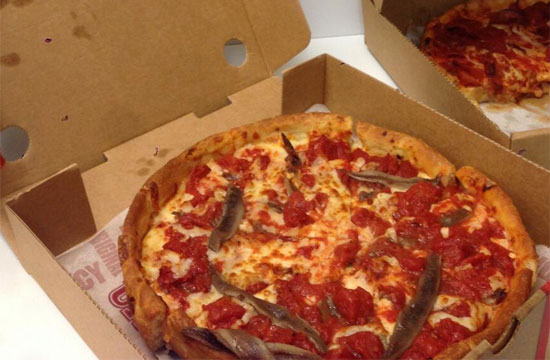 Yesterday, Jon Stewart’s rant against Chicago-style deep-dish pizza went viral, which is par for the course when one calls it “tomato soup in a bread bowl,” “an above-ground marinara swimming pool for rats,” and “fucking not-pizza.”  Many Chicagoans (including at least one deluded half of The Braiser) were upset at Stewart’s evangelism, including its mayor, one very violent Rahm Emanuel.

As a response to this indignity, Mayor Emanuel sent The Daily Show a dead fish wrapped in a pizza.

(For those who don’t know the story, Rahm Emanuel is an angry, angry man who wields the f-bomb like Michelangelo’s brush and yet is still very unpopular in Chicago. Once, back in his younger days, he sent a rotting fish to a pollster who screwed him over. Ever since that incident, dead fish has been a recurring motif in Emanuel’s life.)

But we can only imagine that this was an olive branch, yes? Emanuel sent this as a gift to enlighten the cynical, New York-based staff of The Daily Show on the One True Pizza, right? And it worked, right?