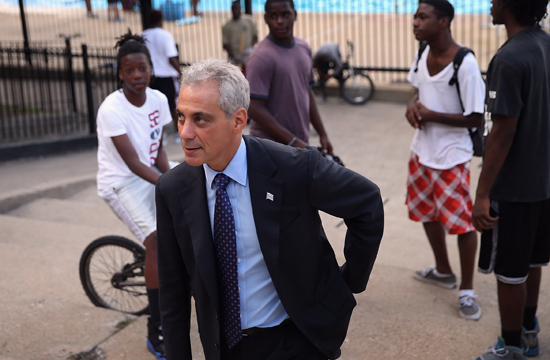 We like Chicago Mayor Rahm Emanuel for his ability to a) swear creatively and b) make people poop their pants out of fear. But generally — generally! — we aren’t fans of people who claim that they’ve accomplished Impossible Things That Make The World A Better Place, when objective reality says that they haven’t. Case in point: the Chicago Tribune checked the Mayor’s claims that he’d made “great progress” in fighting hunger and improving food choices in Chicago’s poorest communities, and found that he kind of sort of made that progress up. (Please don’t stab us with a steak knife, Rahmbo.)

Upon taking office in 2012, Emanuel made a grand promise to reduce the number and severity of Chicago’s food deserts — areas where residents lack access to healthy, affordable food — and recently claimed that they were on the way to Saving Chicago. But these handy bulletpoints by the Tribune, backed up by an incredibly long article dismantling the Mayor’s claims, paint a different, not-so-rosy picture. To wit:

•Two years ago, Emanuel proclaimed that Walgreen Co. would be selling fresh fruits and vegetables at 39 food desert stores by this June. City Hall counts nine that are open, but three of those are not in food deserts.

•The mayor also announced that 17 new grocery stores would open in food deserts. Nearly two years later, just four of those are open and one is being built, with at least two of them approved before Emanuel took office.

•Emanuel called on grocery CEOs at a “food desert summit” to build stores on 11 parcels primed for development. All 11 lots remain vacant.

Okay, fine, it’s difficult to tackle endemic social problems related to public health, we get it, don’t stab us yet, Rahm. But when one cites one’s progress in solving food deserts as a reason the black community should support him (already 40% disapprove of his performance), one should probably cite something one actually did.

The rest of the article can be found below, and we open ourselves up to any Rahm stabbings/outbursts.

[The Chicago Tribune via The Daily Meal]