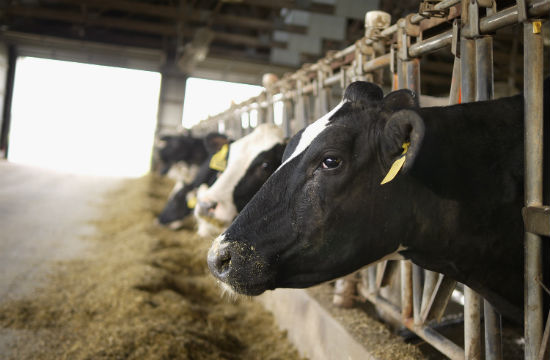 Rawsome Foods founder James Stewart was arrested by three bounty hunters (because bounty hunters can do that in California) in Ventura County and then carted off to jail for skipping two previous court dates after posting bail addressing his illegal distribution of raw milk. Rawesome Foods is a members-only co-op, so technically, he isn’t really “selling” raw milk, although it is completely legal to do so in California. However, the state has very strict laws about the production and sales of unpasteurized dairy, which can contain deadly bacteria if not properly handled.

The first time he was arrested, he posted $30,000 bail on charges of illegally selling raw milk. The second time he was arrested, it was on felony charges of illegally raising funds for Sharon Palmer’s Healthy Family Farms. Mark McAfee, owner of Organic Pastures, the largest raw milk distributor in the country, actually posted his $100,000 bail for him that time. For a second time, James didn’t show up, and Mark was in danger of losing his house, which he had posted in personal collateral.

When James confessed to him that he didn’t plan on attending his third court date, McAfee hired the bondsmen himself to seek Stewart out and arrest him.

Now in jail on his third arrest (and without bail), James has fired the attorney assigned to his case and is choosing to represent himself.

“It is my opinion that James is frail and naive-minded and follows people’s advice who are not ethical and conspiracy-theory oriented,” McAfee said.

Adding to the intense weirdness of the situation are James Stewart’s claims that he had been tortured while in prison and that he was afraid to go back.

“If they say I committed suicide, it means they killed me, Mike. They’re gonna try to kill me,” he said repeatedly in a Natural News interview.

Despite the bizarre circumstances of this particular case, McAfee remains assured that California’s raw milk policies aren’t in any danger.

“This is about the irrational conduct of one person: James,” he said. “Raw milk is 100 percent legal in California, and it is not going to jeopardize that fact or do anything to disrupt this critical and healing food source. The take-home message has nothing to do with the law and raw milk. It has to do with personal choices.”