Restaurant Startup returns to TV tonight and this episode, it’s all about timing. The two teams each have their ideal locations for their restaurants, but if they don’t act soon, they’ll lose their real estate  opportunities. 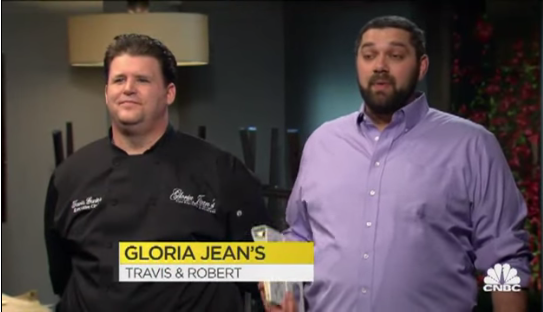 We’ll meet Robert DeBinder and Travis Gunter, who already operate a successful restaurant in Kingston, Tennesee. They’re looking to expand to Knoxville, and are asking for $250,000 for a 30% stake in a second location of Gloria Jean’s. They’ve already got the location, but they need to make moves ASAP if they don’t want it to slip out from under them. The restaurant is named for Robert’s grandmother, who inspired his cooking and taught him everything he knows. Travis, a recovering addict is the executive chef, and does not have a stake in the restaurant.They cook souther comfort food, and everything is scratch made. Tim Love and Joe Bastianich both love the food they sample which includes fried green tomatoes and shrimp and grits.

At some point during the pitch, Joe becomes literally irate because Robert doesn’t want to raise the prices too much with a Knoxville move. I’m not really sure that that’s the issue at hand right now, and I definitely think Joe’s feelings are too “big.” (See: Antonia’s big feelings from two episodes ago). 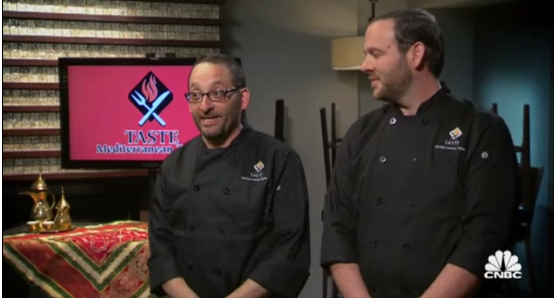 The second group to come through is Taste. Owners Clayton Farhood and Steven Bradley are not only business partners, but they’re life partners too. They’re from Oklahoma City, and they’re seeking $300,000 for a 30% stake in their new concept. They already run a deli-style place that serves Lebanese food, but now they want to open a full-service restaurant that serves Lebanese small plates and appetizers.

Tim and Joe like the guys a lot, and they like the food enough, though they’re not as crazy as they were about the Gloria Jean’s food. More importantly, they’re not thrilled about the fact that neither Clayton nor Steven has ever run a restaurant before. Joe doesn’t like a restaurant concept where “everyone is doing everything,” because it’s a recipe for disaster.

The “Battle of the Pitches” section of the CNBC website, where people can predict which restaurant will get chosen for a pop up has Taste winning by an overwhelming majority. As of this posting, it’s 71%-29%.

My money is on Gloria Jean’s, and it’s not just because I’m on an insane Southern food kick right now. No one wants to reinvent the wheel. Taste is a completely new concept; Clayton and Steven have never run a restaurant before. Gloria Jean’s is an already successful concept. Plus, Tim and Joe liked the food better. Check back tomorrow for a recap!