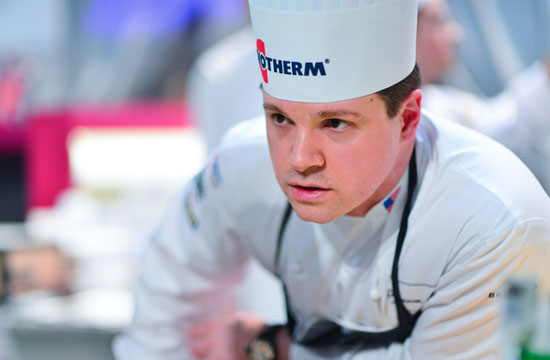 In a retrospective on the Bocuse d’Or for the Huffington Post, Team USA competitor Richard “Batman” Rosendale graciously applauded his peers who made, and remained proud that his team came in seventh place. However, being at the culinary world’s Olympics allowed him to observe worldwide culinary trends, and the biggest developments: not everything plated and served at the Bocuse d’Or was overly French-ified, nor did it veer into molecular gastronomy.

For instance, the fact that the Japanese came in third place (and became the first non-European country to make the podium) signified that the gap between the traditionally victorious Europeans and the rest of the world was rapidly closing.  “The rule changes the Bocuse d’Or committee had initiated this year for the first time — announcing the fish to be used three months after the meat became public, injecting more spontaneity by requiring chefs to shop for ingredients seasonal to their native countries at a makeshift market set-up the day before — were helping level the playing field,” Rosendale noted.

More importantly, though, the ways that people were serving food at the Bocuse d’Or stopped being futuristic and started being more nationalistic:

From a trend perspective, I noticed a decreased emphasis on molecular gastronomical techniques in favor of slightly more traditional — albeit still often wildly creative — platters and plates that evoked the essence of the chefs’ native cuisines. This is exciting in the sense that the competition is less and less about chefs interpreting their countries’ cuisine through the prism of classic French or European cuisine; but challenging in that if you come from a country as large as the United States, which has so many regional cuisines, it’s difficult to translate and distill that essence as clearly as, say a French or Japanese chef, where the judges may have a better sense of what that might look and taste like.

One consolation appears from this observation: French and Japanese cuisine may be easily distilled while America’s vastness and regionality makes such concentration difficult, but in terms of land mass, America is still bigger than all of the other countries in the Bocuse d’Or combined. (Just let us be jingoist while we plot our Bocuse d’Or win for next year.)