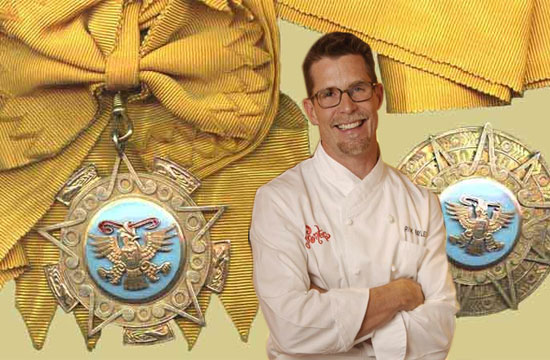 Whether or not it’s fair for American chefs to cook other cultures’ cuisines is still up for debate, but in this case, one of them is being honored by the country he draws inspiration from. Last night, the Mexican government awarded Rick Bayless of Frontera Cafe with the insignia of the coolest-sounding club ever: The Order of the Aztec Eagle.

The award is given to foreigners in Mexico who perform services for Mexico, or for people who are generally awesome to humankind, meaning Bayless joins the ranks of esteemed folks such as Dwight D. Eisenhower, Ted Kennedy, Bill Gates, and Placido Domingo. You know, the Cool Kids Club.

And what services has the Chicago-based Bayless rendered unto the great country of Mexico? Not only is he renowned for his Mexican cuisine (President Obama tapped him to create the state dinner for Mexican President Felipe Calderon, that’s how good he is), but also for hosting Mexico: One Plate At A Time on PBS, where he travels through the country eating mole and cochinita pibil and bringing to attention the cooler, cultural side of Mexico that isn’t poverty and drug-fueled violence.

The honorees, including a prominent scholar of Mexican emigrants and a spa entrepreneur in Rancho La Puerta, were announced last night via Presidential proclamation — and Bayless was totally unaware that he was being inducted into the ORDER OF THE AZTEC EAGLE!!!!!!!!! “Wow! Came out of blue!” he tweeted to a follower who congratulated him.

And we also congratulate you, Rick Bayless! Now we’re going to run around saying “ORDER OF THE AZTEC EAGLE!!!!!!” in a booming voice in an echo-y canyon for the rest of the day.