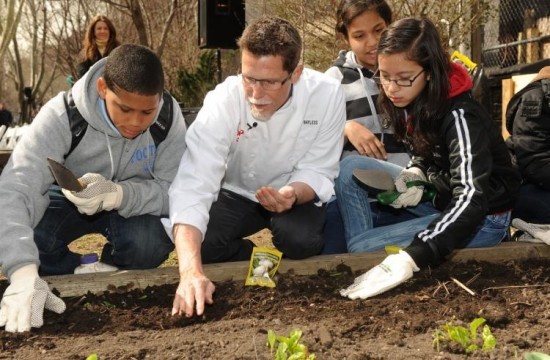 Though we had some fun talking with Rick Bayless about how freaky the Secret Service can be, we were more interested in what he’ll be doing this week with the James Beard Foundation: tomorrow, he’ll be delivering the keynote address for the Foundation’s third annual food conference, and he’ll be speaking on trust. “I’m honored that they’re asking me to speak on it,” he told us. “It’s something that I’m very passionate about.”

In your own words, I’d love to hear you describe your involvement with this conference, specifically the keynote address you plan on giving.

This is a new conference — it’s only the second year of the conference. Or third, I don’t know… But it’s a really cool thing because most people look to the Beard Foundation as the folks that really promote great American food…

It’s really interesting that the directors of the Beard Foundation have decided that sustainability is such an important topic. It’s such a mainstream concern these days, that they would want to throw a whole conference for [it]. Of course, there’s a number of really great authorities out there and people in the food world who have devoted their entire lives to studying sustainability or promoting it.

One of the topics this year is trust. And I think that we can all relate to the fact that sometimes when we look at our food, we don’t necessarily trust where it comes from, or that we really understand what’s in that package. So we’re going to have to really think about how we’re going to develop trust again in that system. And I’ve certainly done that in my career by trying to create a food system for myself and for my restaurant that is what I call “grown at a human scale.” So that means that it’s kind of grown around here. That doesn’t mean that we don’t use some things from far away, but even in our restaurants, when we’re using things like Gulf shrimp, or fish for what we’re using — fish from Hawaii — not that we don’t try to find out where it’s coming from. In fact, we know so much about where it’s coming from that one of our fishmongers will send photos every day of the boat that our tuna was caught on.

So you take a photo of the boat to ensure that the fish was caught in a humane manner, or–

All of it. We’re concerned with everything. We’re obviously concerned with species that are caught, and when it comes to fish, are they a sustainable population of fish, and secondly, how were they caught? And who are the people that are doing it? And when you sort of get to know them through photos and even text messages and emails, it’s more as if you’re all part of the same small family because we can communicate in such a better way these days.

So for us, the idea’s been to create this human scale supply for ourselves that lets the people who supply us know that together, we’re with them as partners. We’re getting the best from them, and they’re getting the best for us. We’re not shopping around for the cheapest thing. We want to make sure that the people who are supplying us are doing it in a very sustainable way, but in a way that’s also sustainable for them. In many cases, it also amounts to, “Are they getting paid the right amount of money for their stuff, or is all of it going to the middleman?” So we try to be directly in contact with those people who are supplying our food…

But I guess what I’m going to focus on most at the conference is: how, as a restaurant chef, I have begun to develop the trust on the supply side with the farmers. When we first started doing this twenty years ago, we started buying from local farmers. Most of them didn’t even trust that they could get in and out of the city without being robbed. They were afraid that we were never going to pay them — they wouldn’t walk out the door until they had a check in their hands, and they’d call me again, and say “I planted this stuff for you! Are you sure you’re going to buy it?” — but it took a while for us to develop a good and honest relationship with our suppliers, our farmers.

But on the other side of it, we also had to convince our clientele, our guests that would come into our restaurants, that what we were putting on the menu was really what we were, in fact, giving them. We weren’t just buying a flat of strawberries and saying “All the strawberries we get are local” and only 90% of them were. If we had something on our menu, we were really giving them that local flavor. There have been some disparaging comments about people who have been greenwashing their menus, not by buying much local product, yet putting [the claim that they buy local] all over their menu. So how can we regain the trust of our clientele?

That was an entire five-paragraph essay there.

So what inspires you to tackle such a wide-scale, “macro” problem?

Because this problem is just hanging right out there in front of us all. And I have to say, I run across people pretty regularly who are afraid to buy anything in a grocery store that’s not packaged, processed food. Because they don’t understand where it comes from, like — “coudn’t that stuff make you sick?” — they don’t want to buy raw chicken, they don’t want to buy very many vegetables because they’re afraid it might harm them, so they go to that processed food and think in some way that that’s going to be healthier for them. When, in fact, it’s just the opposite, as we all know. The more fresh food that you eat, the healthier you’re going to be. Yet we have to develop, as I said, trust, that all of that stuff in our grocery stores is really good.

To me, it pains me to see that people are so conscious about the potential dangers of fresh food, or not even knowing what its health-giving aspects are. So they want to read a label, and there’s no label on the apple, and they want to see how many calories are in it, or the fiber that’s in it, or whatever. So they shy away from it because they’re on a diet, or they don’t trust it. I think this is something that we really have to look square in the eye.

Do you think that this is possible to solve with wide-scale solutions, such as advocating for laws, or does this need to be solved with a grassroots effort?

I’m a total grassroots person myself. So I’ll always be the person to say that the answer to the problem isn’t more regulation of the multinational food companies — I mean, I guess you have to have that — but gosh, when I look at those rules and regulations about it, it just makes my heart hurt. Because it’s not so much about that, to me, as it is about making that human scale food system so that we know where our stuff is coming from, and if something goes wrong, first of all, it won’t be a massive outbreak. It will only be regional. And second of all, you can go look that person in the eye. (Laughs) That person has allowed that problem to arise. I think that the more that we can feel like we’re a part of the same community with those that are supplying our nutritional needs, the more that we are going to have a sense of trust on both sides. That they know that we trust them to give us the stuff at a reasonable price, and likewise, we will give them that trust that yes, I know where my food is coming from.

Did your time in Mexico influence these views on trust?

Yeah, because I fell in love with living in Mexico, where every region had its own food. When you traveled from the Yucatan to Northern Mexico, it was like you had changed countries completely! I mean, the people ate very different things, and were really reliant on the kinds of foods that would grow around them. There was a much, much tighter system — a more regional system — and you come back to the States after living in Mexico for a long time, and everything is sort of like “one size fits all”, and every region is eating the same kind of food.