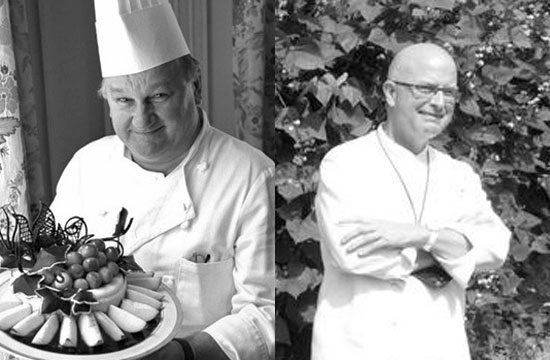 Whoa, whoa, whoa. Who knew that Roland Mesnier, executive pastry chef at the White House from 1979 to 2004, had such a big knife to grind with the White House chefs? Mesnier, speaking on a panel at last week’s White House Chefs at the American Food Journalism Conference, knocked the other chefs on the panel for, among other things, possibly lying about rhubarb.

Having grown up with a huge kitchen garden in France, Mesnier said that he couldn’t believe that the first rhubarb harvest in the White House kitchen garden could yield stalks bigger than the children waving them around. “I know something about rhubarb and someone is not telling the truth,” the Rhubarb-Truther said, according to Obama Foodorama.

“You have totally caught Rhubarbgate,” current pastry chef and Foodluminati member Bill Yosses deadpanned. “A farmer brought us big rhubarb plants” to start the garden; “we had a lot of help from many parts of Washington, D.C. ”

Though the explanation settled the matter of Rhubarb-gate, Mesnier, who oversaw the first White House garden, grown on the roof of the residence and containing a few herbs and vegetables, was miffed that the press was all over the current one. “There has been a garden at the White House for years,” Mesnier said. “This is not news.”

And in a conversation he had with ObFo before the panel, Mesnier, well-known for his sugar sculpture creations, wondered why his pastry successor Yosses was even involved in the garden project. “A pastry chef should be in the kitchen cooking,” Mesnier groused.

Yosses not only likes gardens, he’s also a leading expert on molecular gastronomy and an advocate for environmentally conscientious, healthy and sustainable eating. So yeah, gardens are probably a thing that he likes as a means to educate the public about changes that we as a nation need to make to our diets, Mr. “Chef who made sugar sculptures for 25 years.”