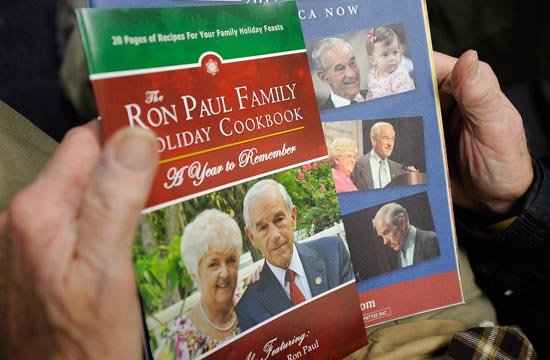 Ron Paul may have finally acknowledged that he won’t win the GOP primary, but this uber libertarian cookbook gives us a freaky glimpse into what may have happened to our sexy, glamorous, celebrity chef-filled State Dinners at the White House.

First off: we had no idea that a cookbook could be libertarian at all. But trust Ron Paul’s wife, Carol, to make Easy Oreo Truffles while wearing an apron emblazoned with “End The Fed” on it. Also, trust her to describe the recipes as “libertarian with a small l.” (Does that mean that all of her chickens read Atlas Shrugged before they willingly lay down their lives as inferior beings?)

The WSJ profile goes into the cookbook and its rather fanatical fans (“We believe they were key to our historic finish in Iowa and New Hampshire,” says a Paul spokesman; “Are you kidding?” we responded), but these quotes from what might happen to the White House kitchens in the world where Paul wins the presidency are priceless-slash-baffling:

In a Ron Paul administration, Americans might see the First Family sitting down to King Ranch Chicken, which is made with Doritos, or Cherry-Pineapple Dump Cake, canned fruit and pie filling topped with dry cake mix and baked.

For the traditional White House Super Bowl Party, what about Spicy Crackers? The cookbook says they are simple: Empty a box of saltine crackers into a jug, add 1½ cups of oil, 3 tablespoons of crushed red pepper flakes and a package of dry Ranch dressing mix. Roll the jug around to mix the contents, “allow the crackers to set for several hours and then, enjoy!”

We would rather see Paula Deen cater a State Dinner than think about what the Pauls would do when hosting heads of state. Think about it. The White House Garden would be left to die. Manmohan Singh would be served the cheapest takeout curry in the DC Metropolitan area, because the invisible hand doesn’t like flying in celebrity chefs to serve dinner. The entertainment would be provided by some random part-time gas attendant with bad covers of Bruce Springsteen and a wonky guitar.

Obama Administration, you’ve spoiled us for sexy state dinners; but doing this to our White House is pretty much like closing the Federal Reserve. Oh wait.