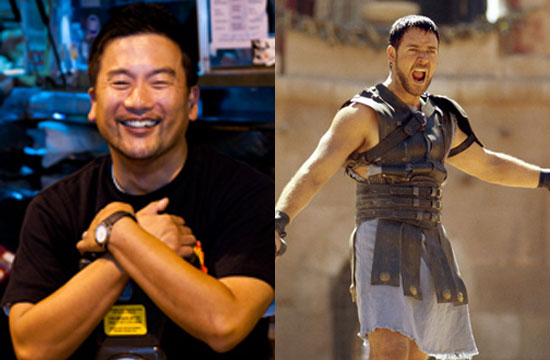 Is this news? Probably not. Is this blog post from Roy Choi about a recent trip to Japan, where he witnessed fish re-enacting the movie Gladiator, the most absurdly awesome thing we’ve read today? Judge for yourself (but the answer is obviously yes):

The whole [restaurant] was a ship surrounded by water.  At the front and back of the canals were holding gates filled with fish, squid, lobster, crabs, eels, and who knows what else.

I imagined them like Gladiator, and there was a Russell Crowe in the bunch. All nervous and discombobulated, aggressive without knowing what was about to happen.

Then as people started entering, they opened the bamboo gates and, like gladiators in the colosseum, they slowly started swimming out, then started really enjoying their new canals of amazingly clean, salty water.

Drums started banging, gongs started gonging (don’t know if that’s a word), and I bet these sea creatures felt like it was a parade.  Humans staring down and admiring their existence.

Then they started handing out bamboo fishing poles to everyone with salted shrimp bait and there was a huge ceremony of clanging sounds then….cast, zip, wire, zing…

They started to fucking fish in the middle of the restaurant.

That’s when I realized there was no food on the table and everyone was hanging over the rails and not over a bowl of soup.

If you are, Choi continues the story’s descent into weirdness on his blog, and it is even stranger than what he just described.

If you are not, it’s okay. We’ll find you a food blog full of Quaker rice cake photos in a few seconds.