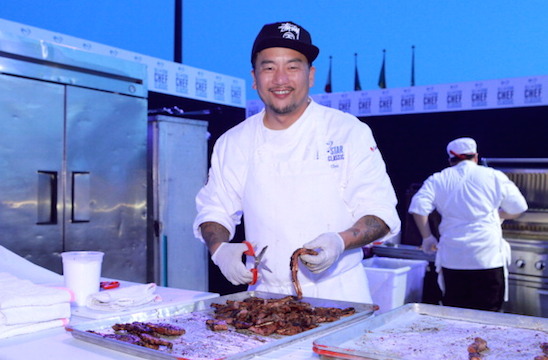 The food world geeked the eff out when Roy Choi and Daniel Patterson announced their new fast food concept in the works, Loco’l, at the MAD4 symposium last week. Now, in addition to dropping some new details about the collaboration and food, Choi is also dropping some major bombs on the current state of fast food and consumer health. (Spoiler alert: we’re all screwed.)

In an interview with Eater, Choi shared the difficulties of turning a fast-food, sugar, grease, and junk food-addicted nation into leafy green eaters. (No really, that shit is addicting.) It’s a tougher road than you might think, he says:

“On the other side of it is being very aware of what fast food is and what it’s become in America, and why it’s so important, popular, and powerful. … The fact is, we’ve destroyed our whole eating culture and we’ve destroyed a lot of who we are as humans in America by the way we’re eating. We poisoned basically the last two generations. It’s really hard to just jump out of that, you know what I mean? Basically just sedated and numbed our whole existence with all the sugar and chemicals … It’s really hard to step back and eat just a regular piece of fruit.”

And Choi acknowledges that fast food corporations are “winning” America’s taste buds. (But not their support — it’s no secret that companies like McDonald’s have been struggling to keep up with the Chipotles of the world, and the fast food worker strikes aren’t doing much to help either.) And he also acknowledges the goodness of the same chains he’s eschewing — in some ways, a Glinda the Good Witch and the Wicked Witch of the West thing.

“We want to just create a burger stand, a fast food chain. We’re just trying to take it back to basics. A lot of these fast food chains weren’t evil before. They started out as wholesome, wonderful burger stands. Somehow along the line as businesses grow, money and things start to change your decisions. Then before you know it, sometimes you don’t know which way is up anymore. Our philosophy in this is to always know which way is up. …

“I don’t necessarily blame [fast food companies], you know maybe there are some evil intentions here or there, but maybe they’re lost, maybe they’re in the weeds. That’s how I look at it sometimes. Maybe McDonald’s and Burger King and all these places, they’re truly in the weeds and maybe they just need someone to take them out of the weeds a little bit.”

Is Loco’l the chain to do it? Just maybe. Still, you’ll be waiting at least until spring 2015 for some of those 99-cent plus burgers.