WATCH: Bobby Flay To Teach Savannah Guthrie How To Cook 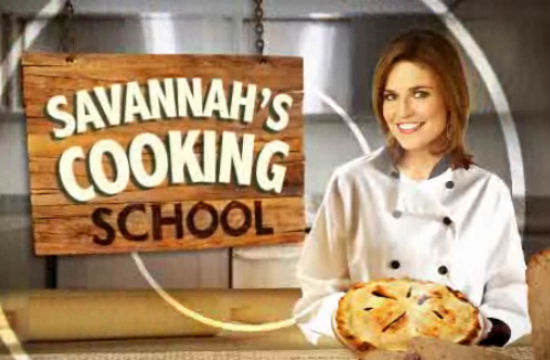 Our eyes were nearly burned from their sockets this morning by the sight of Savannah Guthrie wearing a chef’s jacket for a new Today Show series entitled “Savannah’s Cooking School.” We sort of can’t believe she didn’t go up in flames herself or break out into some sort of horrific rash after putting it on.

Evidently, The Today Show decided to produce this because Savannah’s not the greatest cook, and wants to learn. So they paired her up with Bobby Flay to teach her kitchen basics. Fine. Admirable, even.

You know what’s not fine? Lies. Like this one: “It’s embarrassing [that I can’t cook], because I love food.” Lies! Savannah Guthrie does not like food! Exhibit A. Exhibit B. Savannah Guthrie likes peanut butter and jelly sandwiches and frozen meals. Also, she mispronounces Giada a bunch of times, and like, come on. If Sharon Osbourne can do it right, so can you.

Then Today created this whole cooking show dream sequence where Savannah very cleverly demonstrates how to microwave a Stouffer’s lasagna tray in serious cooking show format, with “Electric Feel” playing in the background (because she’s so Brooklyn, you guys).

Let us be clear: we are not teasing Savannah because she can’t cook. They’re doing a great job of that on the show, and she’s being very humble and charmingly self-deprecating about it. Cooking isn’t for everyone; we eff up recipes all the time — and we know how to operate sous vide machines (also, we can pronounce sous vide); and we think it was Julia Child who once said that every dish should have a mistake in it.

The reason we are totally flabbergasted is because of Savannah’s long history of being flat-out disrespectful to chefs and food. She needs a long class with Andrew “Don’t Practice Contempt Prior to Investigation” Zimmern way before she gets into a kitchen with B-Flay, if you ask us.

So the deal is, Bobby will teach Savannah a basic chicken stock, tomato sauce, and a few complete chicken meals on The Today Show this week, and by Friday, she’ll be on her own, cooking dinner for Matt Lauer and Al Roker. Never one to miss a beat, Bobby quietly comments on how frightening he finds the whole venture, because it proves that anyone can have a cooking show. Ahem.

Check out the clip below for the intro, and stick with us all week, for the soothing, soothing catharsis and empathy we will surely provide for you. Because it’s healthier than screaming at your TV, right, Tom Sietsema?