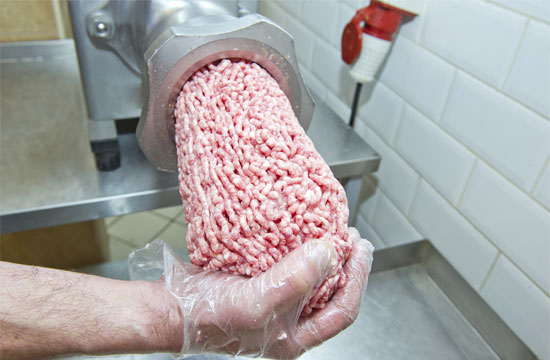 The world is facing some of the highest beef prices to date, thanks to the double whammy of increased demand and drought-thinned cattle herds. This would normally be an opportune time for cash-strapped public schools to cut costs by buying lean finely textured beef, a.k.a. “pink slime,” in bulk. But surprisingly, according to Bloomberg, sales of pink slime to public schools dropped by a whopping 94%.

The Department of Agriculture reports that schools only bought 392,000 pounds of ground beef this year, which sounds like a lot, until you realize that they bought nearly 7 million pounds of the stuff last year. They chalk up the severe drop to the fact that people think pink slime — leftover beef trimmings “treated with ammonium hydroxide or citric acid to kill pathogens” — is kind of a freaky way to get beef. (The USDA insists that lean finely textured beef is okay, but the process can psychologically mess with people’s heads.)

It may be a costly move, though: the average price of ground beef stands at $3.808 a pound, the highest it’s been since 1984, and experts quoted by Bloomberg believe that it would be cheaper to at least mix in pink slime as filler: “As the overall pricing in the beef industry has increased significantly this year, you’re looking at ways to keep the cost down and make the best use of every part of that beef,” John Nalivka, president of Sterling Marketing Inc. in Oregon, told the paper.

Hey, remember when Jamie Oliver freaked out about pink slime? Wonder what he’s got to say about it now.