Science Says You Should Be Eating More Pizza at Work

Science Says You Should Be Eating More Pizza at Work 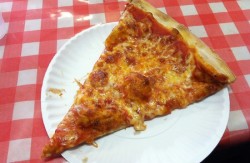 You now have an excellent reason to start demanding pizza Fridays. Science says that pizza may increase productivity at work. David Ariely‘s new book Payoff: The Hidden Logic That Shapes our Motivations examines the notion that even more so than money, pizza could be the thing that makes workers want to try harder and accomplish more.

In a study, Ariely looked at workers who made computer chips in Israel to find out what incentivizes them more: food, money, or praise. At the beginning of the week, participants in the study were sent one of three messages, each with a reward for hitting daily targets. The first group was promised pizza, the second was promised a cash bonus equivalent to £20, and the third group was to receive a text message from the boss complimenting them on their hard work. A fourth control group was sent no message.

It’s interesting because theoretically, the cash bonus could have bought the study participants pizza and then some. It goes to show that money is not our sole motivator.

Bosses everywhere, if you’re reading this, get your employees some pizza. However, even though pizza was a better motivator than cash, we would not recommend offering your employees raises in the form of a bi-monthly pie delivery- not even if it has extra toppings.