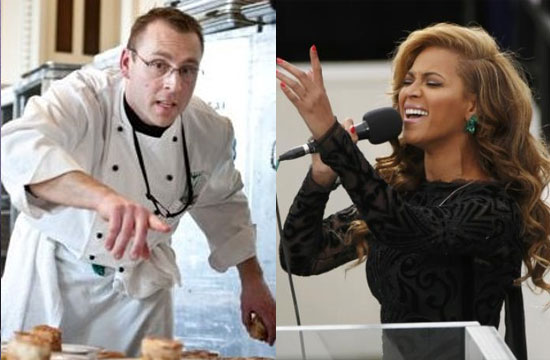 Out of all the people who caught flack during Barack Obama’s second inauguration last week, chef Shannon Shaffer, who cooked the Inauguration Luncheon and recently spoke to Obama Foodorama about the historic/controversial event, and R&B singer/fallen angel of light Beyonce Knowles, who may or may not have sung the National Anthem, stand out.

So who ruined the inauguration more?

Shaffer: Was accused of being unable to cook a New York duck, and thus jettisoned the Empire State’s proud waterfowl in favor of South Dakota bison (which tasted pretty good, according to most accounts, but who cares?) Shaffer insists that he wasn’t about to serve duck at two inauguration lunches in a row (he catered the 2009 lunch). Sen. Chuck Schumer would beg to differ.

Beyonce: May have lip-synched the National Anthem, but it depends on which member of the Marine Corps Band is speaking anonymously.

Shaffer: The Washington Times claimed that each plate had a whopping 3,000 calories, thus turning Michelle Obama into an intractable hypocrite who needs to be put in a Cone Of Shame. Shaffer protested and stated that they’d calculated the servings/total recipe ratio wrong and that, in fact, the lunch was only 1,800 calories maximum. The Washington Times feels no need to apologize, because no one really cares about math.

Beyonce: Made Sen. Chuck Schumer furious and never apologized. How dare she?!

Shaffer: Unlike his 2009 luncheon honoring Abraham Lincoln, he did not make a lunch honoring a dead president, as is the tradition with all lunches thrown by the Joint Congressional Committee on Inaugural Ceremonies. This year, the JCCIC asked for a contemporary menu, which he claimed was “freeing.” In reality, it is a sacrilege to our country’s history. We demand a luncheon honoring Teddy Roosevelt (moose jerky and strips of leather) or JFK (pain medication wrapped in Cuban tobacco)!

Beyonce: Is simply confusing us, because no one has any idea what’s going on with this story.

Conclusion: Beyonce loses. Stop making us doubt how perfect you are, Beyonce! We need something to believe in, in this cruel world.

(Sorry that you had to endure some sort of controversy, Shaffer.)