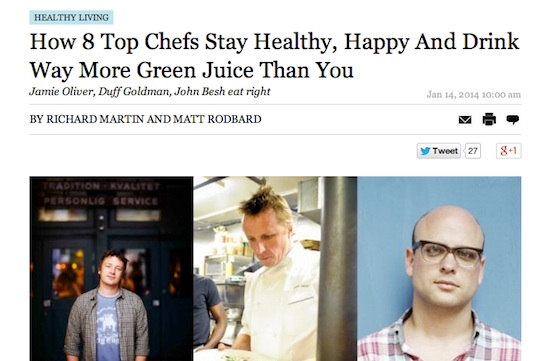 Just to put into perspective just how absurd Elle’s “thin” questions were to the remarkable Christina Tosi (and how amazing Allison Robicelli is for taking those motherfucking questions DOWN), we found these two interviews from Food Republic that asks (mostly) male chefs how they stay healthy. Unbelievably, not one of these men were asked how important it is for them to stay thin. Rude!

The two series of question-and-answers on Food Republic were published as part of its “Healthy Living Week.” Among the 13 chefs that took part were Daniel Boulud, Marcus Samuelsson, Jamie Oliver, John Besh, and Marc Murphy. Now, we could throw our hands in the air and make a big fuss that of the 13 chefs interviewed, only one was a female (although a pretty cool lady, Pig & Khao’s Leah Cohen). But hey, it’s Saturday morning, we have our coffee, life is pretty good. We try not to take people down before noon, generally speaking.

And perhaps we could argue that the angles of these two stories are very different: Elle’s angle, to ask a baker “how, in fact, she manages not to get fat.” (Literal quote!) Food Republic merely asked chefs about their “eating and fitness routines.” (And of the 13 chefs, only one works with sweets: Duff Goldman of Charm City Cakes.) And obviously, Food Republic and Elle are two very different publications with two very different audiences. But hey, no one is asking Daniel Holzman if he’s a meatball addict, or how often a day he eats meatballs. (If we worked at Meatball Shop, we’d eat them at least once a day.) Let’s take a look at the questions posed to this panel of chefs:

What’s the first thing you eat/drink in the morning?

What’s your fitness routine if any? (Similar question from Elle: “Do you exercise?”)

Have you ever done a fad diet?

Any foods or drinks you actively avoid?

And really, we don’t hate them. They’re no worse and no better than the shit we read in our magazines — in fact, they’re pretty straightforward. But then, the question asked to only a few of the chefs: Have you ever struggled with your weight?

When we think about it, that’s a loaded question. The answers from the chefs ranged from blasé (“Not really,” answered Samuelsson) to honest (“I totally struggle with my weight, who doesn’t?” answered Jason Vincent) to amazing (“It’s a constant issue, half joke/half life threatening disability,” said Holzman).

And we wonder how Cohen, or any other lady chef, would have answered it. (Again, not holding it against Food Republic that there’s basically zero female representation — we’re thinking happy thoughts, remember?) Because even that question is one million times more genuine and thought-provoking than any one of the questions posed to Tosi. Perhaps if Tosi had been asked that question, we would have gotten an honest and sincere glimpse into Tosi’s life.

RELATED:
We Asked Allison Robicelli Elle Mag’s Christina Tosi Questions; These Are Her Answers
Elle Asks Christina Tosi a Million Questions About Her Thin Body, Two About Her Food
TIME Magazine Writes Article About How Their ‘Gods of Food’ List Excluded Women, Eats Itself