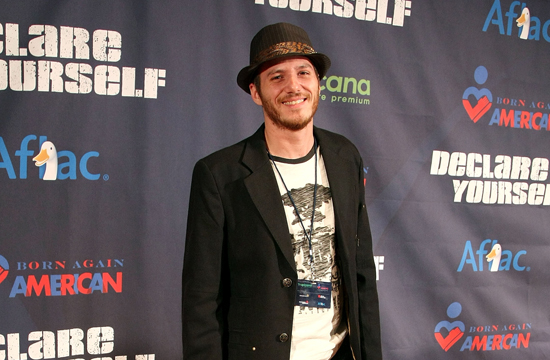 We met Spike Mendelsohn as part of a press event with Captain Morgan, where he served a group of journalists cocktails and holiday recipes featuring spiced rum (one drink featured applesauce quite prominently — “You could dip latkes in there,” the mensch joked).

But we know Spike not from his Obama burgers at Good Stuff Eatery, or from his braised short ribs that he served that night (made with Captain Morgan rum, of course) — we knew him from TV. We’ve tracked his appearances on Top Chef and, most recently, The Next Iron Chef: Redemption. And most controversially, he was kicked off last week after he and his best friend Marcel Vigneron tried to save themselves from elimination by plating their dishes together, thereby being judged together. (Obviously, it did not work.) And the only thing on our minds was: why would you do that?!

Turns out there’s a twist that we — and the viewers at home — didn’t know about.  Spoilers ahead…

So let’s talk about that thing that happened on Next Iron Chef that got you kicked off. Why did you go along with it in the first place?

What people don’t know about Marcel and I is that we have a lot longer history than most people think. It goes back to, like, the beginnings of culinary school and hanging out, making gnocchi, throwing the frisbee around, foraging for mushrooms. Y’know. Then we did Top Chef, and we were there supporting each other behind the scenes, and then we did Top Chef: All Stars together. And we do a lot of the same food festivals together, too. So what people don’t realize is that we’re already best friends. We respect each other, and support each other throughout our careers. When I got kicked off Top Chef: Chicago, I called him right away. When he needs help with something else, he calls me right away. So it’s like, we have this, like, kind of thing.

People thought it was an “alliance” in Iron Chef: America — there’s no real alliance there. There’s only going to be one Iron Chef, and they’re all competing against each other. But if you’re not enemies with the person, if you happen to be best friends, then why not have a good time? Taste each others’ food? Like, be friends during the competition because you’re friends in real life. So people saw that as a little bit of a threat and went through the interview process and they were like, “I don’t know what these guys are thinking with this huge alliance.” And we’re just like, “Dude, we’re just friends.”

Now, why did we do the dual plating?

Yeah, that did not seem prudent. Friendship is one thing. Strategy is another.

Well, the thing that people didn’t realize is that, um, at the beginning of the show, there was a Save Card. Like, they had let us know that if the decision is too close, this year, the chairman has decided to give Alton Brown the power to save someone who happened to be on the bottom. Like if the battle happened to be too close, or if the judges couldn’t decide whose food was better. So in the back of our heads, we all knew that there was going to be a save card. But I guess it didn’t come off on television, so it’s not like anybody watching the show knew.

So we figured, “Alright, they’re making us cook against each other. Why don’t we try to make it as close as possible, and like, taste each others’ food, and tell each other what’s wrong, make the dishes really really stellar? And fuck it, let’s just plate it on the same thing?” Honestly, what’s the difference if my soup was not on his plate, or if it was on his plate? As far as, like, flavor and presentation and everything? There was no real difference. Like, he had his food on his plate, and I had my food on a plate also.

So if you think about it, there was really no difference. we just wanted to have a little fun with it. We’ve always wanted to have a show together and figured this would be a really good opportunity to showcase how we’d work together. You know, we’re a little nutty, and we’re fun, and obviously it was not about disrespecting anybody. We’re not disrespecting people; like, we love the judges, and we love everyone, and we love the opportunity.

And to be honest, the reaction after the show, after seeing all the social media and all the writeups, it’s been pretty amazing. People kind of loved it; they thought it was something kind of different, and occasionally a couple of people were like, “That was the worst move ever,” and you’re like, those people are reading too much into it. There wasn’t too much thought [put] into it. It wasn’t like, (deep voice): “This is what we’re gonna do.” It kind of happened a little naturally. We were like, why not? And we both had really, really stellar dishes. Like, there wasn’t any critique on our dishes at all. But they had to send somebody home, and it happened to be me, I guess.

We were hoping that they were going to save us both — make it like it was too close, like I told you, [using] the Save card.

They’d be like, “You guys made it too close, you plated on the same plate. Why not save the Bromance?” You know what I mean? Like, that’s kind of the way, like —

But wouldn’t you think that they’d save that for way later in the season?

But this is how reality TV works! They save it until the very end. You saw Last Chance Kitchen!

But that’s so predictable, right? If you do it at the very end, they’re like, “Well, we haven’t used the Save Card; they’re gonna save so-and-so!” For us, we thought it was probably gonna be in the middle of the competition. You could see how nervous all the other chefs were when we were cooking, because they also knew. They were like, “Oh, there’s a save card. Oh, are they really doing it?! Oh, they’re trying to get them to pull the card out!” You know? So, that’s what happened.

It probably — I think it came off well. I dunno. I mean, listen, people take themselves way too seriously on shows like this.

So when are you and Marcel going to do Two Bros Cooking?

AAAAUUUGH. Oh my God. You are going to hell for that.

Seriously, now I can’t look at you or Marcel the same.

You said it, not me.

Us cooking, her words. No, we love to cook together. We always to. We just did a food festival in Jakarta, traveled throughout Indonesia and Bali. We had so much fun. And we hope that the Food Network gives us the ability to do that. We also just finished up a show on Tasted. It’s called We’re Drunk, Let’s Eat!.