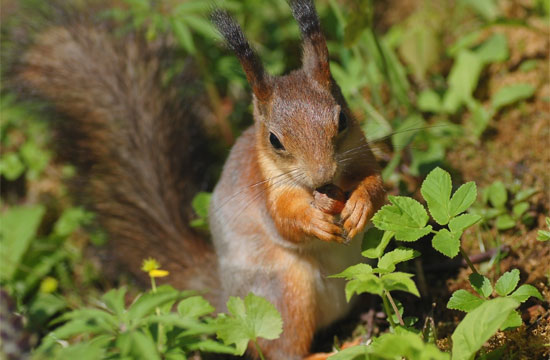 The most devastating aspect of the federal shutdown is not the widespread salmonella outbreaks, nor the disappearance of SNAP funding, nor the absence of Sam Kass’s godly self from the White House. No, the worst outcome of the Government Shutdown Plague of 2013 is documented at Obama Foodorama: the White House Kitchen Garden has been overrun by squirrels.

Weeds choke the once-groomed paths. The tomato brambles run wild, its ripe fruits plop-ing to the ground. The lettuce patches lie fallow, the squashes slowly rot and decay. A fox runs amok the trees, the bees busily make their honey for no-one. And among all the ruin, squirrels, squirrels everywhere, squirrels feasting on the president’s food:

Right now, the many squirrels who live at the White House seem to have gotten even more aggressive with the low level of human intervention. The squirrels are always a problem in the garden, eating the berry crop in the summer months. But they’re now kids in a candy store, gorging themselves.

The bushy-tailed residents are feasting on the ripe Sungolds on the vines, as well as on other tomatoes and peppers littering the ground, as are the many birds who call the White House home.

But like creatures out of a Beatrix Potter tale, the squirrels, dressed in dainty cream-coloured satin waistcoats and Moroccan slippers, have been polite groundskeepers: “The squirrels are also serving their country.  They’ve been spotted eating the volunteer mushrooms that have newly colonized the grounds.”

Oh gosh, this entire tale could be turned into an adorable children’s book…set in a post-Apocalyptic America.

RELATED:
LIST: Here’s What Happens to Your Food When the Government Shuts Down
Lady Chef Stampede: Cristeta Comerford, The White House Chef
GASP: Sam Kass Has Been Furloughed in Government Shutdown