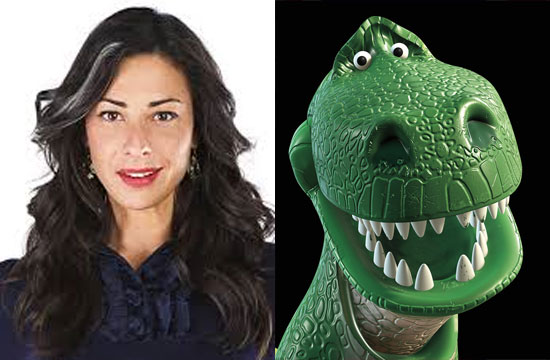 We’re really digging these “New York Diet” diaries run by New York Magazine, especially when they reveal the rich, inner lives of celebrities who enjoy eating. Today’s diary was written by Stacy London, host of What Not To Wear, one of our favorite Power Bitches, and current paleo-eating dinosaur.

The paleo diet is a boring, boring diet, according to London, except for one thing, according to London: “No carbs, no dairy, no sugar, no anything fun…Eat the way cavemen ate, or as I keep confusing it, eat the way dinosaurs ate.” Eating like a dinosaur = kind of awesome, what with the blood and gore, or plant eating and rock swallowing (really). But alas, London’s spirit animal is not a dinosaur, as she learns with regret throughout the week:

The mouthfeel — this almond butter has the best mouthfeel of any almond butter ever. I cannot stop eating it. It literally feels too good to stop eating. I look at the label: almonds (well, one would hope), sugar, palm oil. Fuck. Failed again. That palm oil is a killer. Dinosaurs definitely did not eat palm oil, though I do wonder about their thoughts on mouthfeel.

Happy Bastille Day! Normally, I would stuff my face with pain aux chocolats or crepes or croque madames from Provence en Boîte, but dinosaurs, even French ones, didn’t have much in the way of dough.

Dinosaurs probably killed themselves extinct because their diet sucks so bad.

I want to go to Brooklyn Farmacy and have a Sundae of Broken Dreams. I want to go to Ample Hills and eat ample amounts of their maple oatmeal which cannot be all bad for you because it has tons of oats in it. Oh wait, no oats for the dinos. Scratch that. It is really not a surprise dinosaurs could not survive this.

I meet a friend at August on Bleecker Street, which appears to have absolutely lovely pizza and cocktails and quickly pronounce I am Paleo and can have neither. We have two glasses of wine each. Surely, dinosaurs foraged a grape or two.

The moral of the dinosaur story: “I’m not sure this Paleo thing is helping or hurting,” London concludes. “My brain is all over the place. Survival of the fittest and all. I don’t have to tell you, no dinosaur came out unscathed.” But, hey, it’s better than eating rocks (which, again, dinosaurs actually did.)