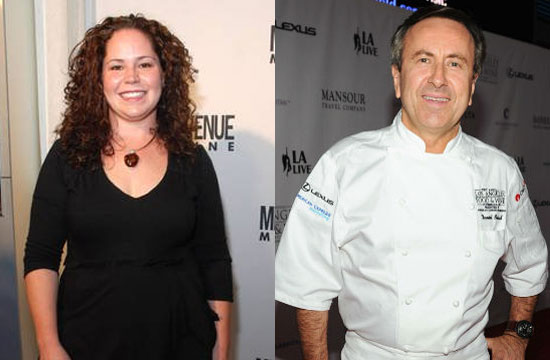 Come on, Fast Company. You seriously cannot expect us to believe that you actually eavesdropped on a conversation between Stephanie Izard and Daniel Boulud out of nowhere, because, please, you have a website to run and content to place on it. But for the sake of these chefs, we’ll pretend that you didn’t contrive the premise of this being a totally spontaneous conversation that you happened to overhear, because Izard and Boulud have some awesome things to say.

For instance! Did you know that “Izard” means “Pyrenees mountain goat” in French? “When I found out, I thought, I have to use that!” Izard said to Boulud. “But I’d never cooked goat. We were like, ‘We should probably learn!'”

Initially, The Girl & The Goat stuck to simpler goat preparations, like braises and sausages. Soon they began tackling more difficult cuts, such as neck and belly, and eventually Izard got ballsy (no, she didn’t serve goat testicles; you’re so gross).

“For Valentine’s Day, I did goat heart and people went crazy,” she said. “I didn’t think anybody would order skewered goat heart!”

And who but Izard would do that for Valentine’s Day? Boulud certainly couldn’t. “You get hard-core with a heart!” he cheered. “But I think you can afford to do those crazy things. I don’t know if I can.”

Then again, it’s probably a totally Izard thing to do, she admitted. “I don’t get all pink and hearts and stuff.”