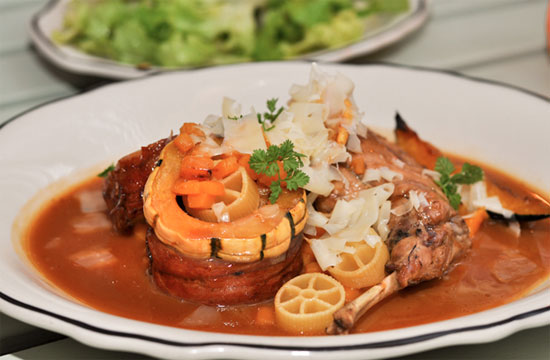 If the health advice of celebrity chefs is generally trusted by the public according to studies based in empirical (or silly) evidence, the public might be doomed. In a survey of cookbook and television recipes by celebrity chefs released last month, the University of Coventry found that 87% failed to meet the minimum national health standards. The study, carried out in Britain (to specifically shame Canada, obviously), argued that the superchef recipes extolled fatty, artery-clogging ingredients such as bacon and butter to pump up flavors.

Naturally, the chefs of Canada, those stomach-bursting, decadent hedonists in the Yukon, disagree vehemently — and none more so than Joe Beef’s Frédéric Morin (who, if you don’t remember, did this). As he said to The Globe and Mail:

The main problem with the British study is that it presumes that the public might otherwise be adhering to a saintly meal plan: “It’s as if the alternative is people making a green salad and a poached egg for lunch rather than the reality, which is 10 nuggets, fries and a milk shake.”

Both he and Marc Thuet, another Canadian celebrity chef, did acknowledge that they were complicit in being fat-pushers — “The more fat you put in, the more you’re going to be an acclaimed chef,” Thuet agreed — but really, they argued, anyone should know that the labor-intensive recipes full of hard-to-source ingredients aren’t for everyday consumption. “I have customers telling me that they skipped lunch so that they could enjoy a dinner here,” Morin explained. “It’s a treat.”

To summarize in the most Canadian way possible, here’s Thuet: “I don’t want to be too blunt, but I think that study is total b.s.”

[The Globe and Mail]