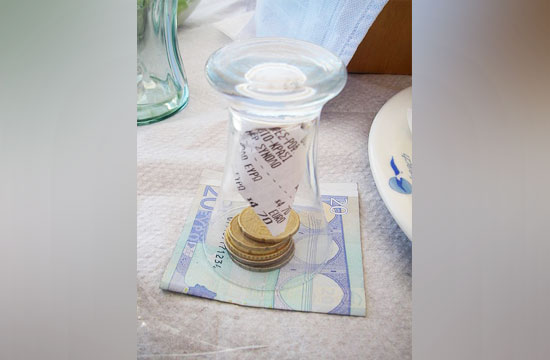 In a break from normal American restaurant tradition, Scott Rosenberg, the owner of Manhattan’s Sushi Yasuda, told Ryan Sutton at The Price Hike that he’s eliminated tips from restaurant bills. That’s right: diners at the high-end sushi restaurant can no longer leave 18-25% of their bills to the waiters, nor screw them over by drawing a fancy picture of a spider and calling their tab “settled.” Instead, Rosenberg’s servers receive a Real Salary (as is customary in Japan), and raised the prices on the menu to reflect that change.

But why would he do that? Everybody knows that waiters exist to be trampled upon, to be kicked around, to be constantly screwed over by rage-fueled customers attempting to seize some form of control in their miserable lives. What is the purpose of a waiter, if not to pretend that he is a friendly robot while dealing with the outrageous demands of his tables, while constantly reminding himself that he’ll surely get a real job soon, and that the economy can’t be this crappy forever, as a child uses him as target practice with her meatballs?

Rosenberg’s explanation cites a bunch of issues — the lack of legal protection for servers’ tips, and the ability to attract more serious, full-time servers with a salary plus vacation and sick leave are crucial ones — but for the normal, grumpy customer, he presents it thusly: don’t you really want to avoid figuring how much to tip a server?

“I’ve always dreamed…wouldn’t it be great not to have to worry about tipping? Look at your bill, make sure that it’s correct and sign the check if you’re good, and you won’t have think and calculate and do a math equation at the table…the risk is that your prices appear to be high on the menu. But if you have faith in what you’re serving, and how you’re serving it, you know that when your customers have a good meal and look at their final tally it’s going to be around the same.”

Rosenberg, shhhhh! Don’t let the waiters find out that they’re human beings with inalienable rights! What are you going to say next, that customers should treat their waiters with respect? Stop your radical thinking.