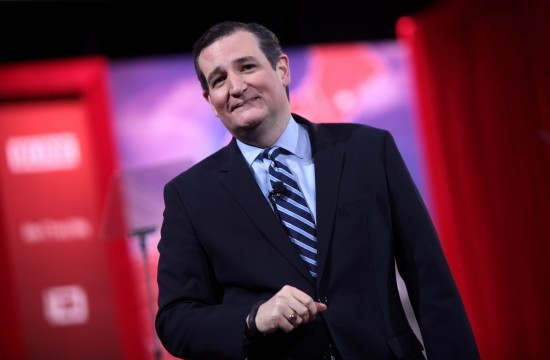 Ted Cruz stopped by GMA this morning to answer some questions from voters. Viewers asked him everything from questions about gay marriage to what he does on date night with Heidi Cruz and what kind of pizza he likes. As far as Pizza, Cruz said, “I’m a thin crust guy, and I will note in the critical pizza primary, I am the only one of the Republican candidates who doesn’t eat pizza with a knife and fork.” So, he hates “New York Values,” except for when those values pertain to pizza. True. In case you forgot, Donald Trump eats his pizza with a knife and fork (though this is just one of the horrible crimes he regularly commits against food), and John Kasich does too.

We can’t argue with Cruz’s thin crust pizza preference. It’s his date night routine that we take issue with. Cruz has a pretty regular weekend routine with his family. On Friday nights, the whole group goes to California Pizza Kitchen together, and so date nights are on Sundays. He said that he and his wife go out late, and that they usually go for Mexican Food or Sushi, which in our world is an extremely controversial thing to do on Sunday nights. We’ve always wondered about the “no Sushi on Sundays or Mondays” thing, and were skeptical, but Anthony Bourdain wrote in Kitchen Confidential that most restaurants only get fish deliveries Tuesdays and Thursdays, so if you’re eating raw fish on Sundays, it’s likely three days old. That’s just about as long as fish should keep, and that’s only if you store and refrigerate fish properly, by the book.

When Anthony Bourdain tells us to do something, we’ll generally do it. Still, Sushi on Sundays is nowhere near as bad as scraping the toppings off your pizza or ordering a well-done steak.

Donald Trump Gets Punched in the Face (On A Donut)