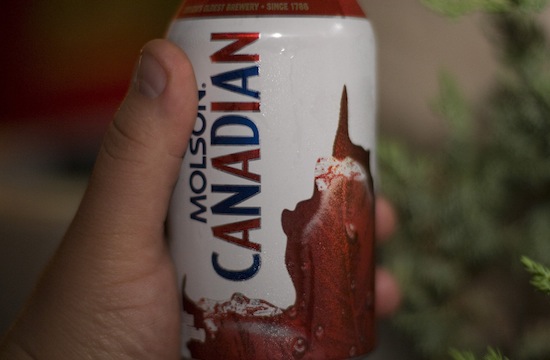 Here’s the thing — if you’re going to have to hand over beer in a bet, DON’T GIVE UP THE GOOD BEER. Give your winning opponent the shitty beer, duh!

Nonetheless, President Obama held true to his word that he’d give up two cases of beer to Canadian Prime Minister Stephen Harper — and not just any beer. It’s the official White House-brewed beer, the White House Honey Ale. As Obama Foodorama notes, it’s the first time that the White House brew has been up for grabs in a such a wager.

Like I said, #teamusa is good but #wearewinter. @BarackObama, I look forward to my two cases of beer. #CANvsUSA #Sochi2014

So let’s think about this — now is not the time to hand over such a talked-about beer.* Had the U.S. won the hockey game (tear), what beer would have the Canadians given us? MOLSON?! So for real, here’s a very unofficial, unscientific list of all the beer Obama should have given the Prime Minister:

5. Budweiser. Because have you had the real Budweiser? No one has.
4. PBR. Nothing says “we could give a fuck” more than a case of PBR.
3. Coors Light. Rocky Mountains, for our great country!
2. Natty Light. Isn’t that what they drink up north, anyways? Let’s get that shit out of the country for good.
1. Molson. Beat them at their own game.

*Mind you, it’s not like we’ve tried it — so who knows if it’s any good. Maybe that’s the problem: THE WHITE HOUSE BEER IS SHIT TOO! JK, sorry Mr. President. We still want to try it.

RELATED:
Breakfast Links: Olympic Snowboarder Wishes for Bacon Medal, Gets One
NBC’s Secret Sochi Starbucks Only Serves the Milkshake Drinks, So There’s That
In Case You Missed It, the Food in Sochi is Still Really, Really Bad