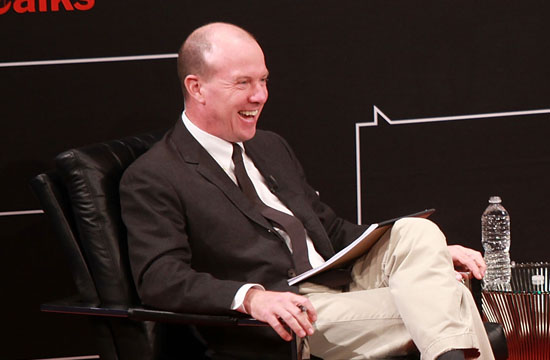 It’s always a pleasure to see the human side of a New York Times editor, especially one tasked with creating a Food section out of the food section. (You read that right — but it’s the Cooking section now.) But we especially like Sam Sifton now for his views on salads.

Some of our favorite responses from Sifton’s Reddit AMA yesterday, and they cover the gamut. On Guy Fieri (which really is pretty tame):

Have you eaten at Guy Fieri’s Times Square restaurant? If so, what do you think?

I have not. You know why? Because my pal Pete Wells did and wrote about it and I kinda thought, Life’s too short. Read his review.

Have you ever had the pleasure or displeasure of meeting Anthony Bourdain? Any stories?

I have met him! (True fact: His mom was a copy editor here at The Times.) He sent me a story when I was an editor at New York Press. I loved it. We put it on the cover. Then the boss editor came back from vacation and spiked it. Bourdain took the story to The New Yorker. It became a book you may have heard of: Kitchen Confidential. Later we would meet again on a dais, where we absolutely ROASTED Alan Richman, the GQ restaurant critic.

OOOH snap. But really, it’s more complicated than that with Richman.

Hi Sam, What is it about Alan Richman? Why is he such an old jaded grump? Why doesn’t GQ fire him and get some young blood in there. Maybe even hire someone who actually worked in a restaurant at some point.

He isn’t an old jaded grump. He just plays one in print. And he’s worth reading close.

On print journalism and the NYT newsroom:

What’s the mood in the newsroom right now after yesterday’s news? Are people still optimistic about the future?

Thanks! I’m glad you like them. We’re okay here. Newspaper people are a dark lot, generally speaking, so bad news is often greeted with a shrug. Could be worse. But there’s an undercurrent of optimism on my desk as well: We’re really excited about Cooking, and hope that it can help us weather the storm.

do you think gluten-free and juices are just a trend ?

I think gluten-free is going to be around for a while. Juices? OJ’s been trending since the first one was squeezed. That’s not going to change, even if we eventually tire of acai.

I’ll rephrase :)
Are there any healthy dishes you regularly eat?

I try for a salad here and there, ideally with lardons of bacon and a poached egg. I’m mad for Chinese broccoli and oyster sauce. I wish these things were healthy. Do smoothies for breakfast with the kids count?

And finally, his dream dinner date:

Who is the coolest person you have ever sat down and had dinner with?