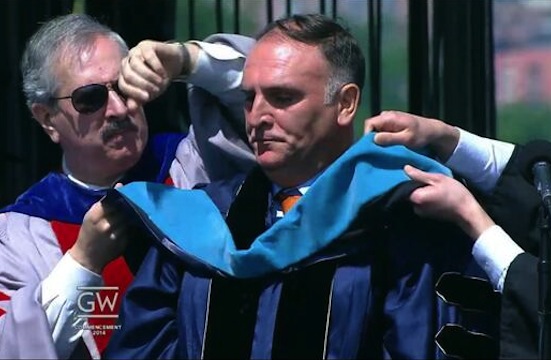 The foodie world and the DC world flipped when GW University announced that chef Jose Andres would be this year’s commencement speaker. Now we’re getting little tidbits of us his speech, and we’re loving it. Be our life speaker, Jose!

First, the chef is humble — and recognizes that he’s like, not a big deal (because everyone from Attorney General Eric Holder to Jesse Tyler Ferguson declined to do the commencement speech). And we do sort of hope that Andres’ email address is sparklypaellaboi@hotmail.com.

.@chefjoseandres pokes fun at his selection with a hilarious video clip during #GWCommencement: http://t.co/SKfdGg3GP4

.@chefjoseandres to #GWU students: “My name is José Andrés, and I am a cook”

And then he went on to be basically amazing.

.@chefjoseandres on American Dream: “I fell in love w/ the idea that no matter what your background, anything was possible here” #GWU

.@chefjoseandres to #GWU students: “Don’t be afraid of rejection … Don’t miss the opportunity to sail into your future” #GWCommencement

.@chefjoseandres: “The world is yours to claim — not because of a diploma, but because we have each other” #GWCommencement

.@chefjoseandres: Success “is about using your skills and talents to do something bigger in the world” #GWCommencement

.@chefjoseandres: Sometimes our journeys feel uncertain, but every step brings us closer to understanding why we are here #GWCommencement

"If things don’t go as expected, make the unexpected work in your favor. Change the name of the dish." .@chefjoseandres #GWCommencement

"It's not only about giving bread to an orphan, but helping build a bakery that can feed an orphanage." @chefjoseandres #quote #inspiration

"Before you can do the cooking, you must first build the fire". -Dr. @ChefJoseAndres, GW Commencement Speaker 2014 #foundations

.@chefjoseandres brings it all back around: “My name is José Andrés, I’m a cook, and I’m so proud of you” #GWCommencement

22 years ago I picked him up at DCs airport in search for a job. Today I am proud to call him Dr @chefjoseandres. pic.twitter.com/LhyR07Xorj

RELATED:
Jose Andres Will Deliver Commencement Speech at George Washington University
Jose Andres Will Blog For National Geographic’s Food Site
We Cannot Stop Staring at this Photo of José Andrés and This Guy from Duck Dynasty at the White House Correspondents’ Dinner