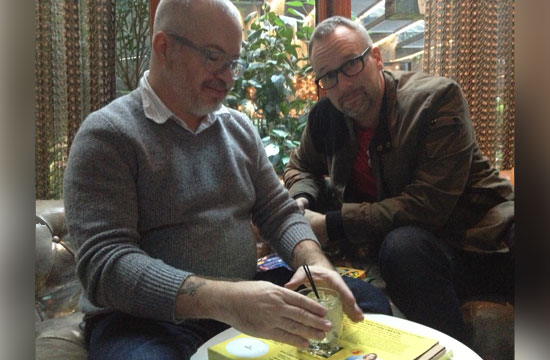 The dudes from The Big Gay Ice Cream Truck never half-ass anything, including our interview with them, and we found it near impossible to fit all of its glory into one post. We won’t even be able to transcribe the experience of ordering margaritas, musing about Top Chef lesbians, playing rounds of Robot Unicorn Attack with Doug Quint while waiting for Bryan Petroff to find his phone (to our editor: “I’m playing Robot Unicorn Attack, go home”), and introducing them to Art Smith for the first time. (As firsthand witnesses, we can tell you truthfully: it was a gay chef supernova.)

But try we did, and boy did we cover a lot of ground (and a lot of their potential chef lovers).

The Braiser: When we ran into you last night at SWEET, you were obviously very crowded and serving your push pops. Who were you looking forward to meeting?

Doug Quint: Oh, I don’t know exactly. It was just that last night was a bit of a tease, because we could see the red carpet from where we were stationed. We got to see the people go by on the red carpet, but we never got to talk to them. On the other hand, we had a lot of people who weren’t even participating come by and talk…[we’d be] namedropping A, B, C, D, E, and F; all these great people came by, and it was super, super fun.

…Actually, we were really looking forward to seeing Anne [Burrell]. We finally ran into her, and talked to her. Of course, now we’re in the same city as her, so — we’re busy people, but she makes us look like we’re laying around at home doing nothing. She’s constantly out of town, flying around, doing different stuff.

Bryan Petroff: It’s hard, when you’re working the event, to even be able to participate. If you’re coming here from out of town, you’re coming here for a purpose. You’re going to do everything, and see everything, even if you’re working the event. But when you live here, it’s hard to not feel like you want your down time, if at all possible. [Laughs]

If you could take anyone at the Wine and Food Festival to a room in the Dream Hotel — whomever you want, no questions asked about what happened inside — who would it be?

Doug: Actually, I’d take Anne Burrell. We’d have to have a vow of silence, and a lot of porters, and it would be craaaazy. There’d be more people protecting the door of our hotel than standing outside Lindsay Lohan’s suite. Anne and I would get craaazy.

Doug: Craaaazy. My other answer would be Chris Cosentino, because he knows what to do with ALL of a pig, baby!

Doug: That’s totally obvious of you. You would.

Bryan: He was telling us about it last night.

Doug: I don’t know if we’re supposed to say who it is. We know who it is.

You do? Is it someone famous?

Doug: Oh, yeah, pretty famous. Another chef with a lot of tattoos. I’ll give you that much. A lot of hair. Yeah, that doesn’t help you much. He’s a northeast boy.

Doug: I haven’t seen him here. He’s a cute boy.

Moving on to interview questions! You’re doing a pop-up truck in LA soon — what would it take for you to open up a store on the West Coast?

Are you worried about competing against people who already cornered the market with frozen yogurt?

Doug: When you look at the amount of frozen yogurt places that are here in New York, I don’t think that LA’s that much worse. Just walking from the L train to our shop, every other week there’s a new place, and I’d say that every other week one of them closes. People have this idea that self-serve frozen yogurt is apparently the way to make money. The amount of shops like that that are opening up right now is ridiculous, and they’re all interchangeable. I don’t want to walk into an ice cream place and be presented with a salad bar.

Bryan: I’m not worried at all. The idea of being someplace where the seasons are negligible — we can always sell ice cream. We like LA, too. The food scene is great. The level of competition out there is much different because there’s no geographical boundaries of feeling like you’re in a particular borough or neighborhood. LA’s a huge, huge county.

Doug: There’s plenty of places for us to pull up someplace.

Bryan: So now, we’re going out there and trying to figure out exactly our options for the first two towns we want to be in. We have a lot of people who want to go in with us as a support network. It’ll happen. I think our dream is to have six or eight places located in New York City or around, in Philly, or up in Provincetown, maybe. Provincetown’s tough! I went up there, and looked at real estate in Provincetown, and it’s so god-awful. The towns a little below it, like Touro, where we did a pop-up, that’s fantastic.

And then West Coast. Several around LA. Maybe Palm Springs, maybe San Diego. But we’re not interested in franchising, so it all has to be within a few hours’ drive, so we can make circuits, and check on how all our places are doing. The one place where you will not see us is in San Francisco.

That’s surprisingly nice of you guys.

Doug: Well, they’re the same way….We really like them. And we can all be successful if we can all stay off each others’ toes.

Moving away from not competing and being nice: you’ve turned down television shows and appearances in the past, but if we were living under an oppressive government and they said, “We’re going to take your truck away unless you compete in a television show of your choosing,” what show would you choose, and how would you win?

Doug: I don’t know. Bryan would never get on TV unless it were exactly the right option. So in this case, I’d have to go on The Amazing Race with Ottavia Bourdain. Bryan would be our phone-in. If we needed one person at home with a huge knowledge database who could direct us, sort of like Charlie from Charlie’s Angels, it would be Bryan. In fact, that’s not a bad premise. (Turns to Bryan, who is searching for his phone) You, sending Ottavia and me on missions around the world? I like that.

So you would destroy people’s psyches with sass and then Ottavia would punch them?

Doug: Well, it would be good TV, first of all. She’s insane.

Bryan: Or we could send you on Wipeout.

Doug: No, I’m too fat for Wipeout. And she’s too spastic. She would just kick the things down.

Speaking of Ottavia, you are good friends with badass, awesome chicks. What is it with you and power bitches?

Doug: That has a lot to do with it. Shoe admiration.

Bryan: Girls like their gays. I think that has a lot to do with it. Strong women and gay boys have gone hand-in-hand for centuries. In fact, biblical times. Yeah, we do know some really badass women. Stacy London is one of them. You see her show, and if you don’t know the show, you think it’s strictly a show about throwing people’s clothes away and making fun of them, but Stacy’s really about rebuilding people, and helping women who feel helpless, really, to find their voice…I think we like people who are strong, who give a shit, who know who they are.

If you had to partner up with a chef in a cooking competition, who would you do it with?

Doug: I would choose Spike Mendelsohn, so we’d lose in the first round and we’d just go hang out. Not Richard Blais. He can’t swim. It’s important. You never know.

Doug: (sassily jealous) You’ve got your LA trip planned out, you pig.

Every time you see a chef, do you automatically sort them into categories of “Befriend/Screw”?

In that case, if you ate the food of any female chef, whose food would flip you?

Bryan: I’m blanking out on the name, but she does that hot chocolate in Chicago. Mindy Segal.

Doug: Sue Torres. Stephanie [Izard]. Ashley Merriman. We’d have to turn each other, actually…What’s the name of that crazy bitch up in Boston? Tiffani Faison. She’s nuts. I like her.

(A producer from the festival wanders over and re-introduces herself to Bryan and Doug, and Doug explains that they met at the wedding of Christine Quinn, Speaker of the New York City Council, possible candidate for Mayor, and one of the first to wed after the state legalized gay marriage.)

So wait, you catered Christine Quinn’s wedding! Can you tell us a little about that?

DQ: We were contracted by the production team six months ahead of time. We had the date on a hold, but we couldn’t say anything ever, because we were the surprise dessert for people as they left. About two months before the wedding we were called by the producers, and a couple of black cars pulled up with a bunch of security people with walkie talkies, and lo and behold, there were Christine Quinn and her fiancee. They tasted the whole menu and decided on a few things.

Then that night we were supposed to take the truck inside the actual venue (they opened up a loading dock) and we couldn’t get it plugged in properly. We plugged the truck in and it wouldn’t work. So we rolled it back outside and the producers were really upset, because they didn’t want the guests to have to go outside, because they thought it was a safety threat. But none of the guests cared. They all came storming out. Commissioner Ray Kelly, a bunch of political figures, [US Senator] Chuck Schumer…he actually left the party a little early and came to the truck while we were still trying to figure out the plug situation. He really, really wanted a cone, and  was really annoyed that he couldn’t have one. In the end he believed that we weren’t lying to him, but it was really funny.