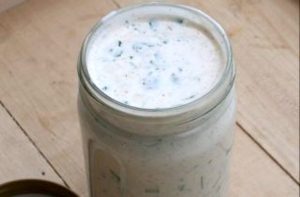 Washington Post contributor Ben Adler is learning the hard way that you do not talk smack about ranch dressing. Today, the paper published a piece called “Ranch dressing is what’s wrong with America.” In the piece, Adler argues that not only is the condiment disgusting and unnecessary, but also that it’s “going to destroy the planet and starve the global poor.” He says that if we don’t moderate our ranch eating, “we will run out of resources to feed the Earth’s 7 billion-and-growing population and cause massive climate disruption.”

That’s a bold claim. And while there are people who agree with Adler, it’s also a claim that doesn’t sit well with America, and that’s become incredibly evident in the comments section of the article. Choice sentiments include:

And, of course, this take on the classic poem:

“First they came for the Ranch Dressing, and I did not speak out—
Because I did not like ranch dressing.

Then they came for the bacon, and I did not speak out—
Because I am watching my cholesterol.

Then they came for the cupcakes, and I did not speak out—
Because I’m not a big fan of dessert.

Then they came for pizza—and there was no one left to speak for pizza.”