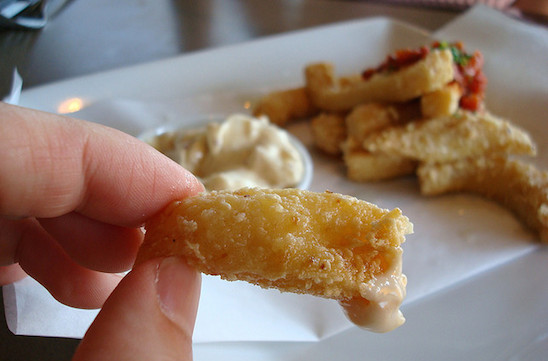 Let’s all note that Cronuts are mentioned nowhere in this article, but there are lots of graph thingies.

The New York Times has used its handy dandy “Times Chronicle” tool to figure out what everyone is actually eating, and somehow fried calamari gets thrown in there. It didn’t get popular until the 1980s, says the NYT:

Fried calamari made a voyage that dozens of foods have made over the years: They start out being served in forward-thinking, innovative restaurants in New York and other capitals of gastronomy. Over time, they become more and more mainstream, becoming a cliché on big-city menus, showing up in high-end restaurants in smaller cities, and eventually finding their way to neighborhood bistros in the hinterlands and chain restaurants across the country.

In the last decade alone, the list includes tuna tartare, braised short ribs, beet salad and pretty much any dish involving pork belly, brussels sprouts or kale. In an earlier era, the list might include sun-dried tomatoes, pesto and hummus.

The argument is that it takes 16 years to “rise from obscurity to mainstream,” and that nowadays, it takes little time for a food to really become over-covered by the New York Times trendy. You’ll have to click ahead to see some crazy graphy things, which we think are measured in Standard Calamari Units? We don’t know, but we will get on board.

Oh, and also people really like pizza. And tacos.