Tweets From the #Mad4 Symposium

The Only Tweet You Need to See From the #Mad4 Symposium 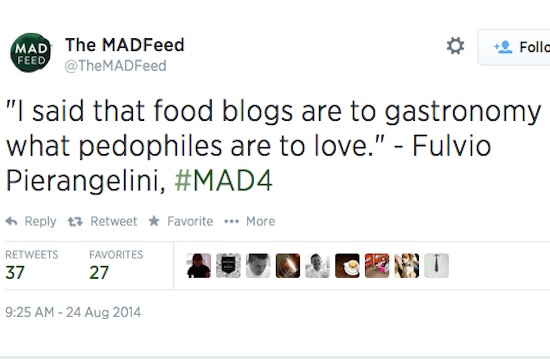 In which we food bloggers are compared to pedophiles? Uh….

We’ve been following along our favorite food geek conference, the MAD symposium, with people like David Chang, Chris Cosentino, Alex Atela, and Roy Choi. And every once in a while, you see such a gem of a Tweet that just makes you stop and question everything. And this was it for us:

"I said that food blogs are to gastronomy what pedophiles are to love." – Fulvio Pierangelini, #MAD4

Heh, heh. Not at all uncomfortable for us … moving on.

Other things we’ve learned from #Mad4:

"The way you eat and cook has a lot to do with your values and beliefs." – Julian Baggini #MAD4

"It sounds pretentious, but cooking is the most complete art form. It deals with the 5 senses." – Alain Senderens #MAD4

"Opening a restaurant is a discomfort that's almost painful. But it's pleasurable, because you grow." – Tatiana Levha, #MAD4

Inspiration abounds — except we food bloggers should probably stay out of it, right?

RELATED: MAD Announces the Theme of the 2014 Symposium
WATCH: David Chang’s MAD Opening Talk Will Make You Want To Conquer the World