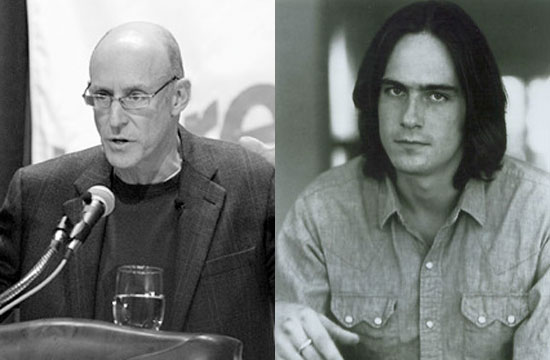 Readers of Michael Pollan’s newest book Cooked may know that he once had a pet pig named Kosher, whose favorite activity was stealing beef steaks from his neighbor. (Hey, it’s technically kosher to own and not eat a pig! Leviticus, for the loophole win.) However, Pollan never goes into the weird, strange tale of his pig’s inevitable demise in the book. Ruth Reichl managed to coax it out of him during a dinner conversation printed in the latest issue of Smithsonian Magazine, and whoa hey there, it involves James Taylor?

When Pollan was 16 years old (and Kosher was less than a year old), he entered her in the Massachusetts State Fair and won a blue ribbon. There, he happened to meet the legendary singer-songwriter, who also happened to be a pig aficionado and had a pig named Mona. They exchanged pig tips, somehow stayed in touch, and when the summer ended, Pollan realized that he couldn’t keep Kosher in his Manhattan apartment. (That’s the only time that this sentence can ever make sense, ever.)

In a bold move, the teenage Pollan asked James Taylor if he could watch his pig — and to his shock, Taylor agreed to keep Kosher in the same pen as Mona. And then the most disturbing thing that could ever happen to a 16-year-old boy who loved a pet pig, happened:

Mona is chasing Kosher around and around and it’s starting to get a little alarming, like, Kosher is sweating and stressed and what looked like working out their pecking order started to look a little different. So we decided we had to separate them. And James Taylor had just had an accident, had cut his hand seriously so he couldn’t use it…So I had to build another pen, in the woods. Just putting some boards between four trees. And he tried to help me. And by the time we had that ready and went back to get Kosher, Kosher was dead. Mona had killed Kosher. Probably just given her a heart attack—I don’t know. There was no blood or anything. It was horrible, and he felt terrible. Here was this kid, this 16-year-old kid, and his pig had just killed the kid’s pig.

In retrospect, Pollan mused decades later, “I didn’t know that mature pigs confronting a baby pig that’s not their own will harass it.” But at least he didn’t eat it, Reichl pointed out, and Pollan agreed. “Stress before slaughter, that’s where you get those ‘dark cutters’, as they’re called in beef production — that dark mushy meat you sometimes get from stressed-out animals.”

Also, he would be eating a pig named Kosher whom he loved. Is that against the Old Testament? We’re pretty sure that it’s against God’s laws. We think. Whatever, that’s disturbing and that’s how cannibals are born.

RELATED:
WATCH: Graham Elliot Singing Journey’s ‘Open Arms’ With Nakia Will Rock Your Face Off
Poll Finds Rachael Ray More Trustworthy Than Michael Pollan, Here’s What He’s Missing
PETA Wants Pigs To Have A Comfier Ride To The Slaughter
What Is It With Rock Stars And Drugs Hot Sauce?
WATCH: Guy Fieri Makes His Broadway Debut In Rock Of Ages