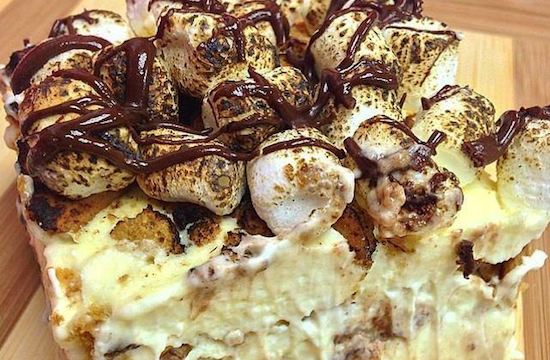 So much so that our gal and favorite baker Allison Robicellis had to address everyone’s concerns on Twitter.

Actually, this is more the wrath that the Cronut brought: once a food item becomes so popular that it simply can’t meet up with the demand, it wreaks havoc on food media a very hungry public. What happens when a mom and pop bakery, like Robicelli’s Bakery, hits the bigtime with a food everyone can’t stop talking about? Well, you run out of stuff.

We are actually closing up the #bayridge shop for the day now, because we're completely sold out of everything.

But Robicelli does what she does best, and that is in being awesome and continuing to whip up some homemade Nutelelasgna. (Which, by the way, sounds incredible: cannoli custard, Nutella, chopped chocolate, roasted nuts and homemade marshmallows stuffed in between lasagna sheets?! Are we dreaming this?!) And so she answers all of people’s questions for the dessert that has blown up:

#Nutelasagna fact one: we do not make a nut-free version. Also no gluten-free or paleo.

We sort of can’t believe that someone asked this. Nutella is made of hazelnuts! IT HAS “NUT” IN THE NAME.

#nutellasagna fact number two: it is currently sold out. We will have more at noon.

#Nutellasagna fact number 3: we can only deliver to the Hamptons by courier, and it is expensive, so please don't be shocked by the fee.

#nutellasagna fact four: we cannot deliver to Syracuse, buffalo, Vermont, Wisconsin or the UK. CT, again, is courier, they set the price.

Guys, Syracuse (the closest of the bunch) IS A SIX HOUR DRIVE FROM NEW YORK CITY. You must be too desperate for these things.

#nutellasagna fact five: we are not giving out a recipe. You can buy our cookbook- Robicellis: A Love Story, With Cupcakes- on Amazon

Already setting her apart from Dominique Ansel and the absurd “at home” Cronut recipe.

#nutellasaga fact six: today it will be on @thechew. Tomorrow I'll be live at 9 on the @BigMorningBuzz with @NickLachey talking about it.

#nutellasagna fact seven: we're doing the best we can right now. We're not the cronut. We're a mom & pop. We have no big investors.

We have the tightest, best staff in the world who are busting out butts to make as much as possible. But it takes time to make good food.

This is where we feel for the Robicellis gang. They’re not Dunkin’ Donuts, alright? And they’re not machines! Let them create their Nutelasagna in peace and be joyful that you even get to enjoy such a thing!

#nutellasagna fact eighth: #Nutelasagna: The Musical, will be staged live in-store in January.

#nutellasagna fact nine: yes, we WILL deliver to your hotel if you're coming to #NYC For Christmas.

We sort of hope that the Nutelasagna never jumps the shark, but for the sanity of Robicellis et. al, we sort of hope it does. Stay sane out there and tip your baker well!