This is a Ramen Doughnut. We Can All Go Home Now. 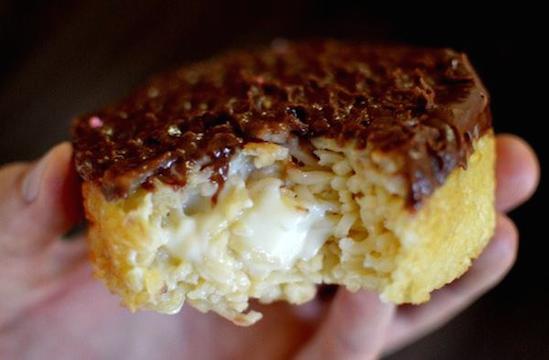 This guy, Josh Scherer of Culinary Bro-Down, decided to make a doughnut out of ramen because we haven’t massacred the once-delicious ramen noodle just yet.

Boston cream ramnut. It's a donut, but made out of ramen, because that's #smart. pic.twitter.com/98RFQw95i5

And we don’t even think it’d taste all that badly, thanks to the horchata used and you know, fried things. We may have been willing to give this a go, had it not been for Scherer’s bro-down bro-mess of an explanation as to why anyone in their right mind would think to fry up ramen and eat it like a doughnut:

… I don’t want to consume food culture, I want to produce it. By recycling the same Pinterest recipe for red velvet kit-kat cheesecake over and over, you’re complicit within cultural stagnation; you’re taking things from the conversation without adding anything new. I’m just trying to spark up a few lines of dialogue. I want to do things that are unique, things that have never been done before, and whether they taste good or not is tertiary to the real goal of progress. I’m going to shotgun method the foodie frontier until I hit a fucking bullseye.

If this is pinnacle food culture, we think we’re going to go home now. Like forever.

And it’s called a “ramnut.” If that’s not the most inappropriate-sounding name of a made-up food we’ve ever heard of, we don’t know what anything is. But make it at home, you (ram)nuts.

(And sadly, this is not the worst food mash-up we’ve seen this week.)