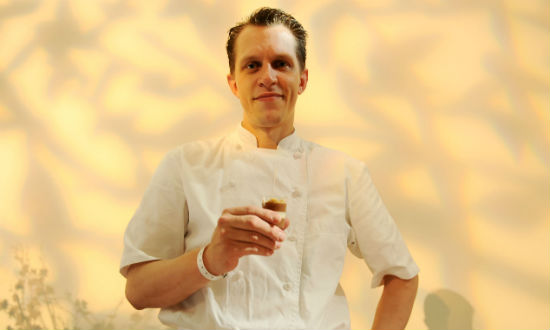 In March, famed pastry chef Michael Laiskonis had a two-day pop-up restaurant in Atlanta. He recently wrote about the experience on his website, and it was an interesting look at what goes into putting together a pop up. He even revealed a few things about himself — did you know he isn’t a fan of waffle houses? Here a round up of our favorite pop-up secrets from Michael.

Michael had the option of working with another chef on the resto, but decided to reach back into his past experience cooking savory food and put together the entire menu by himself:

Though I’d been given the option of pairing up with another chef, I knew from the outset that I wanted to organize the entire meal from start to finish, sweet and savory. My former life as a line cook was a faint memory, but as rusty as those skills were, I felt confident I could pull it off. The overall menu would play off my primary role as a pastry chef; I also wanted to channel the South to some degree. We were scheduled for late March, so I was excited to see what kind of early spring ingredients I could incorporate.

If you have enough initiative, you too could have the chance to work for Michael Laiskonis before you finish school:

As luck would have it, my friend Eli Kirshtein was the first to enlist his services, and with him came pastry chef Andrea Litvin and David, a recently transplanted New Yorker. Anthony, a young culinary student, enthusiastically emailed his interest to assist, and cook/photographer Emily B. Hall drove in from Athens to complete the lineup

Music for both the guests and the chefs was provided by a vintage record player brought in by the owner of the space. PS. We’re digging your records of choice, Michael!

Nicholas, our host who runs the space, was on hand, too; he brought in a turntable and a crate of records. Nothing beats cooking (or dining) along to full sides of vinyl LPs, from the Pixies, Big Black, and Joy Division, to Black Sabbath, Minutemen, and The Fall. As soon as the needle dropped while the first few guests took their seats and amuse-bouches of crab, parsnip, and passion fruit hit the ‘pass’ all of the anxiety that had built up over the previous weeks and days suddenly melted away.

[Notes From The Kitchen]