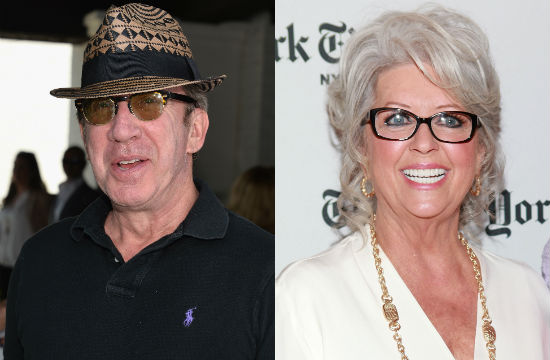 On June 19th, 2013, better known as Paula Deen Deposition Leak Day, Tim “Father Figure Of Our Collective Youth” Allen also happened to be doing an interview with the Tampa Bay Times, in which he addressed Paula’s use of The N Word in comedian terms, which, while the argument may hold water for comedy, seemed a little misguided when applied to a Food Network cooking personality and restaurant owner in Georgia.

“I’ve had this argument on stage a million times. I do a movie with Martin Lawrence and pretty soon they’re referring to me, ‘Hey, my n*****’s up.’ So I’m the n***** if I’m around you guys but seven feet away, if I said n*****, it’s not right. It’s very confusing to the European mind how that works, especially if I’ve either grown up or evolved or whatever, it literally was growing up in Colorado, with Hispanics and Anglos, that’s all I remember. So when Paula Deen (admits her language), they go after her, and now we’ve gone backwards in the world. She said n***** in ’83 or something?”

Then he tried to make the ‘comedy is a safe space in which we explore the dark underbelly of humanity using humor to inspire catharsis, discussion, and the healing of social consciousness, so nothing should be off-limits’ argument:

“In Webster’s old dictionary the word ‘n*****’ means unemployed and indigent dock worker. That’s one definition. So I said, (to my brother) in that case …he lives in Boston and he’s not employed …so you’d be a n*****. And he goes, yeah. If my brother told me not to call him a dingleberry in front of my mother, ‘cause I knew it pissed him… pisses me off. As soon as Mom left, and I wanted to piss him off? I’d say ‘dingleberry, dingleberry, dingleberry.’ So if you’re around a word to be problematic for you and low intellect or uninvolved people find that out, they’re gonna call you n***** all day long ’cause they know you don’t like it. And I said, so this debate rages in the public, but when it gets to the comedy world, we’re not even allowed to say it, and I gotta refer to it as the N-word, F-word, B-word …it gets all the way down the line. It gets really intense; we’re running backwards.”

Sure. Right. Yes. Except for one thing. Paula Deen isn’t a comedian trying to make social commentary. She’s an elderly woman from the South who seems to have plumb forgot that just because a black man sticks a gun in your face, doesn’t make it socially acceptable for you to refer to him by The N Word. Allen also asks, “If I have no intent, if I show no intent, if I clearly am not a racist, then how can ‘n—–‘ be bad coming out of my mouth?”

While it’s perhaps true that Paula didn’t have malicious intent dropping N-bombs in her kitchens or asking her black employees to participate in antebellum dress-up hour, that doesn’t excuse — in fact, it only serves to compound — the fact that she’s behaving in a completely tone-deaf, insensitive, and socially ignorant manner. Just because she doesn’t realize she’s being racist doesn’t make her not racist.

Nice try, Tim, and you’ll be our #1 Toolman forever, but your defense of Paula Deen is just a wee bit shaky.

RELATED: Food Writer Uses ‘Heroin Addict’ Bourdain To Prove The Emmys Unfairly Snubbed Paula Deen
The Woman Suing Paula Deen Speaks Out For The First Time: ‘I Am What I Am’
Paula Deen Asked Her ‘Soul Sister’ & Cook Of 22 Years To Dress Like Aunt Jemima
Paula Deen Defends Use Of ‘N-Word’, Wants Black Employees To Dress Like Slaves (UPDATED: And She’s Fired)