To Celebrate the End of AlineaBabyGate (Or Whatever), The Best Tweets from @AlineaBaby 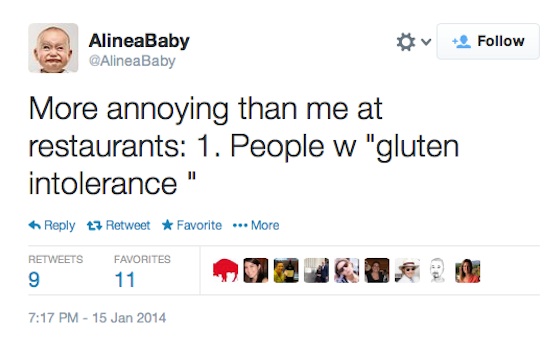 So the Grant Achatz–baby thing is kind of over, right? He suffered intense criticism, made some parents angry, and blamed the whole thing on the inconsiderate kids, not the baby. But really, the best thing to come out of the whole thing is @AlineaBaby, because obviously.

Within the last week, @AlineaBaby has managed to Tweet “his side of the story” and gain some notoriety — even a follow from the man in doodoo himself, Achtaz. Naturally, these parody accounts only have so long of a shelf life (see “Alinea Teen” below), so we’d like to give credit to its sense of humor while it’s still relevant and funny. We can only hope @AlineaBaby will take on the dining scene in New York and across the country; let’s see how Rene Redzepi or Jose Andres deals with these little monsters — er, we mean babies.

They gave me a black bib so as not to leave white lint on my onesie. They noticed I had no hand preference – this place is classy!

Chef comes over and he's like "If you don't stop, I'm going to tweet about this!". I did not think that was a good idea, but I can't talk

More annoying than me at restaurants: 1. People w "gluten intolerance "

My bris was a freakin' nightmare. The people eating at @SpiaggiaChicago were so angry that we had it there.

Despite its name, @_TFL_ does not do a great job with organic diapers. Guess I'll have to try #BenuSF pic.twitter.com/HCavT2nyzl

And our favorite, when responding to Achatz’s baby détente:

@GinoJRocco @Eater Meh. Been there, done that.

RELATED:
Grant Achatz Blames the Parents, Not the Child, in the Alinea Baby Brouhaha
WATCH: Grant Achatz ‘Does Think Children Should Experience Fine Dining at an Early Age’
I Was the Alinea Baby, But Charming: How To Keep Your Kids Chill at Fancy Restaurants