Todd English On Oysters, Man Caves, And The Feng Shui Of Kitchens 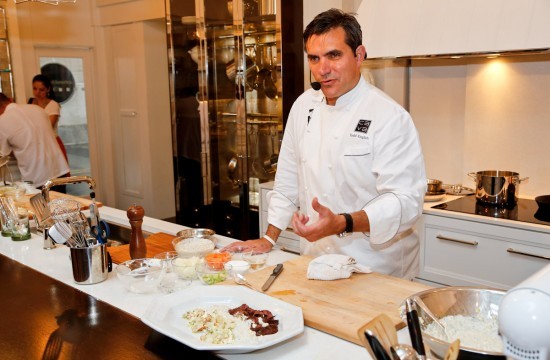 Todd English is a rambler and he does what he wants. He’ll skip over the entire “let me show you how to make cornbread” part of a House Beautiful demo if he doesn’t have cornmeal, but wax poetic about brown butter for a good five minutes. He’ll putter over to some tourists sitting on the corner of the counter and give them the giant cast iron pan full of spoonbread and maple syrup-poached lobster that he magically pulled out of the pantry, as well as a comedically large spoon to eat it with. (“Today’s your lucky day, huh?” he grinned at the flabbergasted family.) He does the TV Chef thing very well, talking through the hiccups in his live presentation with the ease of Steve Jobs.

Maybe that’s why he’s known for opening restaurants whenever he feels like it, or purchasing oyster farms just because, or why a growing coterie of Bostonians would love for Todd to just cook again. But maybe that’s why, when I talked to him, I found his meandering, unscripted thought process — the way that he’d follow a concept like a child chasing a butterfly, then notice a different, more colorful one out of the corner of his eye — rather novel and refreshing.

The Braiser: You’re known for a variety of projects — mid-range restaurants, high-end restaurants — but now you’ve got an oyster farm. So — what exactly is the Todd English brand in 2012?

Todd English: You know what it is, it’s curating for the masses. I really believe that — well, they’re not masses, but just curating the in the sense of masses — I want it to be masses. I want people to eat better. I want the world to. On all levels, I actually feel that food is our greatest democracy. We all have to eat, we’re humans, we all have to eat in a certain way, and my mission since I’ve gotten out of school — which was a long time ago — was to really see the world change from this perspective of food and sourcing and where we get our ingredients and how we get our ingredients and we are what we eat, and so, to be able to eat more seasonally, eat more [locally], which is really happening now. And you’re seeing it in all urban environments and in a lot of environments.

So, as far as what my inspiration is, it’s to curate things for people so that they can have all kinds of options of eating, because I think we all eat in different ways and many different environments and many different occasions and I think that’s the fun of eating and also enjoying food. Not just eat to live, but live to eat.

That ethos is really powerful –- that local ethos, that quality ethos. Can you possibly translate oysters into something that has that quality, but for a massive audience? Honestly, I’ve had mass-produced oysters before and they weren’t the best.

I’ve actually become very educated about oysters in the last year since I looked at the farm, and it’s not much about the mass-production of them. It’s about how they’re produced, as to salinity content, as to environment. It has to do with how long they sit in the water, how deep the water is, how cold the water is, all those things. There are a lot of things.

An oyster iss like a grape, you know. It’s the product of its environment and it’s very much what it’s fed and its nutrients, because they are basically, let’s face it, filters. [He sees me pulling a face.] They are! I know that’s disgusting, but they are. Don’t you love a good oyster? I think the one thing is to really be able to do oysters, have them be healthy, in a sustainable way that one is sure of its freshness and its quality.

How did you get involved with House Beautiful?

You know, I have designed some kitchens and I get asked to do that a lot. So House Beautiful interviewed me, talked to me about doing some articles in the future about what makes a home kitchen cool and fun and make it so it works. It’s interesting how the commercial side of kitchens has gone into the household and in many ways the household has gone into the commercial side. There’s this waning of practicality. You know, I feel like a good kitchen should have the right feng shui, should have the right flow, should be easy to work in. The sink shouldn’t be so far away that you’re going back and forth and making this big trip. So, that’s what I get asked a lot.

So, what do you think about this Kitchen Of The Year?

It’s amazing. There are a lot of great things about it. One is that it is the center of the house. Kitchens are the new living rooms of households.

Man caves? [laughs] I don’t know if they’re man caves so much. To me, a man cave is more of a bar in the basement and that’s where the man hangs out with his buddies and smokes cigars. But to me this feels equal opportunity for all who cook, and the fact that you can actually get people involved in cooking. I just walked in the pantry and it’s great. It’s great to have a pantry like this. Because you need storage and when you’re a cook, you want to have certain things that can inspire your cooking and also your dining experience, so — [He pulls open a drawer, then flicks it closed. It slows about an inch in, then eases itself shut] — there’s plenty of plate storage and glass storage and it’s obviously beautiful, and it’s very important that it’s nice and cozy.

[We walk out of the pantry, and he gestures at the demonstration island with a deep farmhouse sink. Beyond that, guests mill about, munching on his hors d’oeurves-sized corn bread and lobsters.] For me, I would much rather have the stove on the front, but I like the fact that it’s an easy place to turn around and you have that nice counter where people can hang out and watch and there’s plenty of space. People can stand around, they can have cocktails when you’re entertaining, and it makes it very easy. I think space and counter space is very important, because you’re constantly running out of that, especially with bigger parties.

I would be completely remiss if I didn’t ask this, because I’m from Boston. But you recently got a tepid review of Olives in the Boston Globe –- what is your reaction to that?

That was like yesterday, but hey…[He pauses for the first time in the interview.] You know, I just think, honestly, I’m not gonna answer that.

It’s not so much of a recession; I think things are changing a little bit. I can’t say the economy’s perfect, but we have gone through a tough time, obviously. It’s one of the worst recessions since the depression, so I’ve found that people will always seek refuge in restaurants [because] they need a place to escape from the pressures of life.

I find that restaurants and the environments that I create, or [try] to create, are places where you can go and forget about your day, whether it’s over a martini or a great grilled skirt steak. Whatever it is that allows you to take that break from life and enjoy your friends and remember why we exist on this planet, and to try and have a good time and enjoy each other because, you know, money comes and goes and life changes, but the most important thing is – you have to remember the important things in life. For me, it’s my children, my friends, my relationships with my friends and my family and those are things that always sort of keep me centered and focused and grounded.

So, at this point if I were to open my dream project, I think it’s still that place in the country where I can grow everything and I can see it all happen. You know, it’s that organic place, that retreat that I can really enjoy doing what I’m doing and educate and inspire and really feel what I do. Because I really love what I do. At the end of the day, I love the business of cooking and the business of entertaining, because it is the entertainment business, and so that would be the thing that would be one of my dream projects at this point.