Tom Colicchio on SNAP Cuts | All In with Chris Hayes (VIDEO) 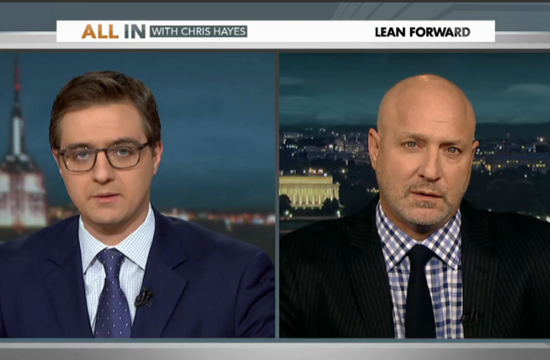 As the vote to extend the Supplemental Nutrition Assistance Program draws closer, it’s clear that both sides of Congress plan on cutting the program — it’s just a matter of how severely they’ll do so. While the GOP demands $40 billion in cuts to the program and the Democrats propose a smaller, $4 billion cut, a recent deal between the House and Senate chairs of the Agricultural Committees presented a compromise to cut $8 to $9 billion from the program overall.

Oh, listen! What’s that noise? The one that sounds like a cross between a growl and aural Valium? It’s the noise signaling the return of Welfare Bear Tom Colicchio to MSNBC!

“Both sides are spinning right now,” Colicchio, a longtime advocate of SNAP benefits, complained to Chris Hayes last night (the new deal also dickishly proposes to cut heating benefits, which means people get to be hungry and cold. It’s a mercy, really: it doesn’t matter now if the poor are hungry, because now we’re going to preserve them in ice and revive them when the economy improves! Unless, of course, they win the lottery while they’re frozen like mammoths.)

“It seems to me that we are no longer investing in our most precious commodity, and that is people. When you have one-sixth of the population that can no longer participate in the American Dream, something is wrong with our entire system. With 50 million Americans who are food insecure, this is just a canary in a coal mine — this portends that there are a lot of other structural problems out there and things we need to address.”

Watch Welfare Bear rail against the death of economic mobility in America below: