Parts Unknown's Russian Adventure Could Not Be Better Timed

Tonight in Food TV: Parts Unknown’s Russian Adventure Could Not Be Better Timed 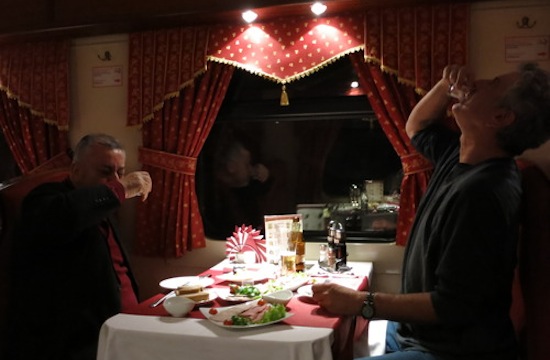 You know that those CNN producers were like “Oh, trouble in Russia? And Anthony Bourdain just went there? SCORE.”

And granted, Bourdain’s Russian adventure is sort of mind boggling and intriguing. Shot before the Sochi Olympics (an inevitable shit show in itself), much of the episode takes on whole new meaning, considering recent events. Wrote Bourdain on his Tumblr:

In this episode of PARTS UNKNOWN, we take a look at Vladimir Putin’s Russia. Not Russia, the country of Tolstoy and Gogol, poetry and great sacrifice, forests of birch. Nor the Russia haunted by the Great War, Lenin and Stalin, terrors, gulags and purges. The Cold War does not feature in this story—nor what immediately followed. We’re looking at Putin’s Russia, the country he’s made—is making, right there, in full view of the world. We look at who’s doing well—and who is not.

Oh, and we can also speculate about Putin’s penis:

Putin appears to see himself as a manly man of the old school. By old school, I mean mid-period Stallone. He is fond of appearing in public with his shirt off while riding a horse or standing in front of a tank or holding a large gun. A Freudian might be inclined to quip ”sorry about your penis” but there is no hard information as relates to Mr. Putin’s length or girth in that department.

Come on Bourdain, what kind of hard-hitting reporter are you if you can’t give us this kind of “hard information?” (Excuse us while our minds explode from all the unspoken “that’s what she saids.”)

Nevertheless, grab that bottle of vodka and settle in for a russ-tastic episode of Parts Unknown.