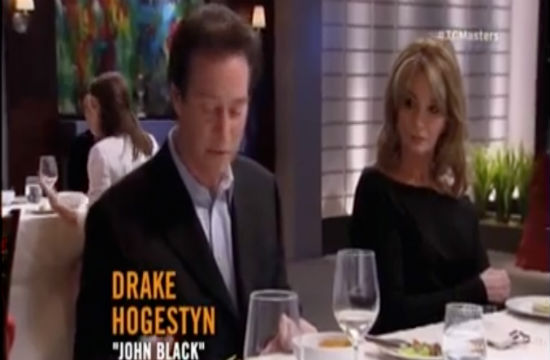 On last night’s Top Chef Masters, cheftestants had to create Sex-, Greed-, or Murder-themed dishes for their elimination challenge, in honor of special guest judges celebrating their 12,000th episode (yes, three zeros): the cast of Days of Our Lives.

Proving that the ancient soap series stars are, in fact, cryogenically frozen robo-humans, they ultimately chose to eliminate a chef for a signature dish she’s been making for thirty years. Let’s investigate.

Odette Fada, for her murder theme, decided to make her signature raviolo, which David Burke remembered fondly from her days working at the famous San Domenico in New York. Odette called the dish “Lucrezia’s Jewel,” playing off the story of Italy’s favorite true-life soap The Borgias, filling it with mushrooms, which femme fetale Lucrezia Borgia used to poison people. The egg yolk oozing out of the raviolo when you sliced into it symbolized the life flowing out of someone. EXCUSE US WHILE WE DAB AT THE TEARS ELICITED BY THIS BEAUTIFULLY CRAFTED STORY. No, but seriously. That was an impressive use of dish-as-metaphor. Snaps for Odette. Burke even called it “a sure winner” when he saw what she was making. Observe below.

Then, she got her plate in front of the Days of Our Lives stars, who had this to say about the dish she’s been making to critical acclaim for thirty years.

Somehow, she wound up with the worst dish in her group according to the actors, even though Sang Yoon forgot to plate two of his components.

Cherry on the sundae? The only way the critics could stand by the actors’ critiques was to tell Odette that the diners weren’t very used to seeing egg yolks. It was something very new for them, and so they were turned off by it. Egg yolks, that is. Thankfully, Douglas Keane was on hand, also in the bottom three, to nail the diners for their lack of sophistication. (Politely, of course.)

We don’t know who to murder over ungrateful rubes getting to eat raviolo made by Odette Fada and then dismissing them based on scary egg yolks, but someone will die.