WATCH: And Your Newest Top Chef Master Is… 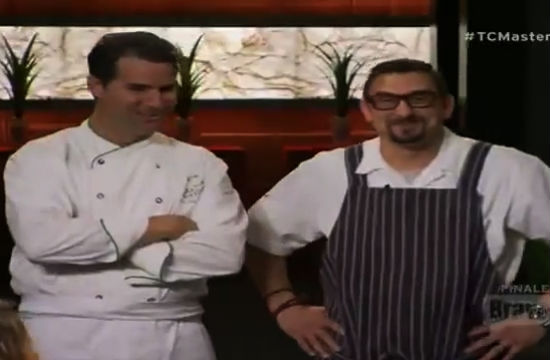 After an insanely beautiful four-course meal from both Kerry Heffernan and Chris Cosentino, in front of what was definitely the most intimidating panel of (ALL-CRITIC) judges all season, a winner was crowned Top Chef Master, and took home $100,000 for his charity. And the winner was…

…Chris Cosentino! He ultimately walked away with a total of $141,000 for the Michael J. Fox Foundation.

The theme of dinner turned out to be refined, classically trained chef vs. steampunk offal dude. Chris and Kerry were tasked with presenting four dishes reflective of a love letter, an apology letter, a thank you letter, and a letter to self. Chris’ beef heart (love), tripe (thank you), and blood sausage (self) challenged an intimidating table of critics, including Alan Richman. Luckily no sazaracs were thrown, but John Curtas, author of Eating Las Vegas, called Chris’ blood sausage, fried egg, and oyster dish “embarrassingly bad.” Cosentino’s apology letter was uni and scallops for his wife who stood by him loyally while he slaved away to make a name for himself, largely ignoring his husbandly and fatherly duties.

Overall, Kerry’s problem seemed to be presenting overly refined, classically presented dishes that showed too much reserve for the amount of emotion the challenge called for. But, critics noted, his dishes tasted spectacular, and were comprised of comforting food they’d want to be eating all day.

Chris’s dishes were far more challenging to the palate, but, were more simply presented, and chock full of heart and blood and guts (literally and figuratively). Thus, a critical dilemma was born. Do they pick the chef who cooked the food they want to order or the chef who made conventionally unappealing food delicious against all odds.

Is it just us, or did Top Chef: Masters actually, like, touch on serious culinary issues and debates last night? The Magical Elves got mad high-brow on us, are we right?

Check out the two clips of the critics’ reactions to Chris and Kerry’s dishes and let us know which side of the philosophical fence you fall on.