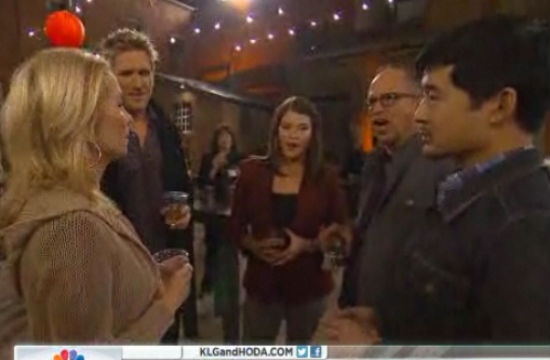 Hey, we get it: after ten seasons of Top Chef, five seasons of Top Chef: Masters, , and two seasons of Top Chef: Just Desserts, coming up with new and inventive challenges can be tricky. But there is a line. And yes, that line was crossed when chefs had to create dishes out of pre-packaged foods sold at Target using only appliances they could find in the store. And yes, that line was crossed again when chefs had to cook on a barge with only glorified vending machine snacks for ingredients. But this is really, actually, physically flinging one’s elfin self off the Magical Elves’ dingy to jump that shark. According to Robin Leech, in one episode of Top Chef Masters Season 5, which is currently shooting in Las Vegas, and set to air later this summer:

“The chefs parachute from a plane carrying all the cooking utensils they can. They reportedly land in a field of sheep and lambs and have to immediately host a barbecue.”

1. Skydiving while carrying sharp objects and/or a knife roll strikes us as unsafe.

2. Skydiving into a field where adorable sheep are roaming around to break one’s fall also seems unsafe.

3. Landing on a sheep while pointing one’s cooking utensils at it seems to be the most humane way to slaughter the thing, actually, come to think of it, in this case.

4. No, but really, is this going to be one of those episodes about the importance of knowing where food comes from, underscored by the chefs slaughtering their game on camera?

5. Where are they going to find a field full of sheep in the desert? Although, the visual of parched lambs wobbling around in the arid sand is sort of hilarious — JUST KIDDING, IT’S HORRIFIC AND SAD.

5. Obligatory Francis Lam(b) pun. (Sincerely, though, we hope no Francis Lams were harmed in the making of this episode.)

So many confusions. But we can’t wait to watch this hot messery unfurl.