Transformers Wine Rack Made Out Of Car Parts 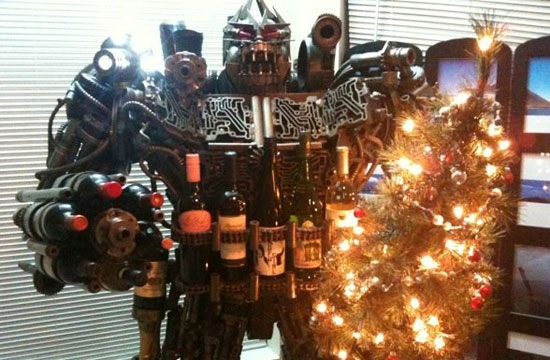 Okay, it’s in Scottsdale, AZ and it costs more than the down payment for a luxury car, but COME ON GUYS THIS TRANSFORMERS WINE RACK IS TOO AWESOME. It’s so awesome, its awesomeness defies taste and accusations of tackiness to become the Coolest Thing We Have Seen On Craigslist, Ever. I mean look at it! It fires WINE BOTTLES out of A GATLING GUN.

The owner of the wine rack in disguise built the entire thing out of real car parts, then wired it up with blue LED lights to mimic the light of the Allspark, then added a bunch of wine racks to mimic Megatron on a huge bender.

“There are only several times in one’s life when one has the opportunity to purchase something that is RIDICULOUSLY COOL,” says its mysterious owner. “This is one of those moments.”

But the Transformer wine rack — shown here also holding a Christmas tree — will cost you a pretty penny: $7,000, as well as your dignity as a true Transformers fan. “It doesn’t have the stately dignity of Optimus Prime,” a nerd friend of mine complained when I showed it to him. “I want it to be Optimus who presents my wine to my guests.”

And this is why we at The Braiser think Guy Fieri should purchase this beauty immediately. The dude will eat a burger if he hears that it’s made out of cars. Unless you think that it’s TOO AWESOME to fall into Guy Fieri’s hands, in which case, let the Craigslist guy know that you desperately need a Decepticon in your home.