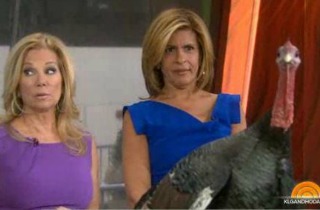 It’s the time of year when unholy turkreations begin to bombard our newsfeed to the point where we avoid the bird altogether on actual Thanksgiving and just eat a double portion of stuffing/dressing (you do you) instead. The earliest culprits of the season, courtesy of Vine and Twitter respectively, are Justin Warner and David Burke. Here are the Turkey-related stories that collectively made The Braiser Staff go O_O in the night.

Mariella’s Pick: “I kind of just want to replace the site with an embed of this Vine on the day after Thanksgiving, instead of running the customary ‘How Chefs Repurpose Thanksgiving Leftovers’ slideshow.”

Tina’s Pick: “One day, with the resources of the Earth dwindling, the fertile plains of New York giving way to an arid dunescape, and the Bene Gesserit search in the desert for the Kwisatz Haderach while the world clamors for efficient and tasty ways to cook food, I’d probably go with David Burke’s sous-vide turkey a la dishwasher for Thanksgiving. Sure, the science is sound. Sure, the vacuum-sealed food would technically not be contaminated by sloshing gray dishwater. Sure, a sous-vide machine is prohibitively expensive for now and this might be more affordable.

But this is still as frightening as a sand-worm.”

This delicious turkey was cooked in my home dishwasher. Next step on the bone and under broiler to crisp skin pic.twitter.com/ZcjxBQoNJY

@JohnsonWCBSWLNY I will post recipes when finished. I also did maple cinnamon sreamed pears in glad bag in dishwasher